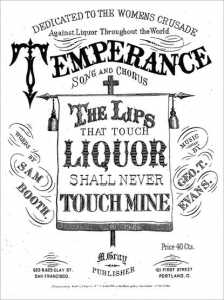 There were many campaigns throughout Britain during the 19th century to reduce the number of places at which alcohol could be purchased, or simply to encourage people to drink less. The campaigners had many objectives but the main ones were to benefit people's physical and spiritual health, and to reduce opportunities to drink before and during work hours. The Act to prohibit the sale of Intoxicating Liquors on Sundays in Wales (1881) was one of the most successful of these campaigns. The first Temperance Society in Wales was established at Holyhead in 1832; by 1835 there were 25 in Wales, including one in Aberystwyth.


Information gathered by Temperance organisations provides some useful statistics. This newspaper report shows how many parishes in Wales had no public house or beer shop in 1869.
The Lower House of the Convocation of the Province of Canterbury, in the appointment of a committee on intemperance has been the means of obtaining most reliable and important information; from which the committee has compiled a valuable and useful, appendix to their report, which by order of the house has been printed, and forms a most convenient book of reference. Appendix K.K. reveals the fact that there are in Wales 153 parishes, townships, and hamlets, without either public house or beer shop; classified as follows:
The above excludes twenty-four places of which no reliable population return could be obtained; therefore our prohibitory population considerably exceeds the totals given.
Wrexham and Denbighshire Advertiser and Cheshire Shropshire and North Wales Register, 25th September 1869

It is estimated that, by 1900, one in 10 of the British adult population was teetotal.

Temperance Organisations were successful in their campaigns to reduce the number of licenced premises in the county. For example, the Aberystwyth Town Council requested the County Licensing Committee to refuse applications for the sale of intoxicating liquour at Constitution Hill and Blaendolau Meadows because of the evil's wrought by strong drink and this would not be in the interests of the town.
(Aberystwyth Town Council Minutes, 16.10.1894, Ceredigion Archives)

In 1877, a local newspaper expressed concern about the behaviour of young people in Aberystwyth:
NOVEMBER HIRING FAIRS. THE toleration manifested towards ancient customs of doubtful morality is well illustrated in some parts of Wales by the popularity of hiring fairs. … Next Monday, the first Monday after the 12th of November, the streets of Aberystwyth will be crowded with youths of both sexes whose term of service for the year has expired. There will be a good deal of drinking, especially if the weather, as is not improbable, happens to be cold and wet. Girls, more unconscious than innocent of wrong, will be dragged about the streets in ways that would make them blush for shame if shame had ever been kindled in them. … Just as the farmer's wife, who would not enter a beer shop at any other time, will sit and drink in a tavern on market day, so servant girls, who are never inside a public house all through the rest of the year, will on the day of the hiring fair enter them and take drink that robs them of self-control, and in many instances is the first step towards lifelong sorrow and disgrace.
The Cambrian News and Merionethshire Standard, 16th November 1877

PUBLIC HOUSES AND TEMPERANCE.
At the annual licensing sessions for the borough of Aberystwyth, held in that dirty, draughty, unsuitable place which should be called the Town Hole, a good deal was said about the need for decreasing the number of licensed houses in the borough, the presumption being, whether justifiable or not, that the fewer public houses there are the greater will be the measure of temperance. …
Cambrian News and Merionethshire Standard, 20 February 1914, [Leader]

Physical Deterioration and Alcohol
In 1906, the Town Clerk of Camberwell sent the Aberystwyth Town Council a copy of a poster entitled ‘Physical Deterioration and Alcohol’ and suggested that it was widely distributed. The Council agreed to hang one in the Town Library, and the British Women’s Temperance Association asked Council to put them up in other places for the whole year.
Aberystwyth Town Council Minutes, Ceredigion Archives, ABM/SE/1/7, pp. 39, 88, 176, 331,

Some Temperance Organisations in Ceredigion
There are thousands of references to Temperance activities in local newspapers from the 1860s.

BAND OF HOPE
Children and others were encouraged to take a pledge against drinking alcohol by organisations such as the Band of Hope. The Reverend John Williams who was born in 1826 was brought up as a Calvinistic Methodist by his father, John, a draper in Bridge Street, and his mother Mary, the daughter of the harbourmaster. John Williams attended the Great Exhibition of 1851, where he encountered the Band of Hope, a temperance movement. He returned to Aberystwyth and founded a group in 1852. They met in the Tabernacl Chapel and processed around the Town Clock.
John Williams was a Methodist minister without a church but he did many good works throughout the town. He built the Temperance Hall in North Parade; he was secretary of the local Life Boat Institute; a member of the School Board and collected money for University College.
He paid for the water fountain at the base of the Town Clock.
(History of the formation of the Band of Hope and a poster for a Temperance demonstration 10.11.1897; National Library of Wales MS 2813C (David Samuel's local history notebook, 'Origin and Early History of the band of Hope in Aberystwyth (1897), written on 9.11.1897 in English and Welsh)

THE SUNDAY SCHOOL ASSOCIATION made an appeal, in April, 1915 to abstain from alcohol during the war.
(Record books, Unitarians Congregation, New Street, Aberystwyth, National Library of Wales Minor Deposits 1304A, p. 164)

BRITISH WOMEN'S TEMPERANCE ASSOCIATION
The Aberystwyth branch of the British Women's Temperance Association were urging that in any lease of the Plas Crug flats, it should be stipulated that no intoxicating drinks be sold on the premises. In addition, they were in favour of restricting the sale of alcohol on Sundays and as the campaign for total prohibition increased, they came under pressure to restrict the sale of alcohol on their property.
Aberystwyth Town Council Minutes. 19.6.1894
As a result
The Council requested the County Licensing Committee to refuse applications for the sale of intoxicating liquour at Constitution Hill and Blaendolau Meadows because of the evil's wrought by strong drink and this would not be in the interests of the town.
Aberystwyth Town Council Minutes, 16.10.1894, Ceredigion Archives

ABERYSTWYTH AUXILIARY TEMPERANCE SOCIETY
Formed in 1835. A minutes book, a list of subscribers, rules and a membership card may be found in National Library of Wales MS 8323B.

INDEPENDENT ORDER OF GOOD TEMPLARS
A temperance society open to men and women.
According to their programme (number 1, February, 1885), The Aberystwyth Branch of the Good Templars met weekly in the Good Templar Room over the Cornmarket, Market Street. The English group (Star Lodge, no 48) met on Wednesdays, and the Welsh language group (Ystwyth, rhif 196) met on Fridays. The Olive Plant Juvenile Lodge (English) met on Wednesdays at 6 p.m. and the Welsh Juvenile Lodge met at 6.30 on the same day. (Ceredigion Museum, 1976.31.116)

INDEPENDENT ORDER OF RECHABITES
Motto : Truth and temperance, Love and Purity. Peace and Plenty, the Reward of Temperance. Established 1835?

UNDEB DIRWESTOL MERCHED DE CYMRU (THE SOUTH WALES WOMEN'S TEMPERANCE UNION) formed in 1901. One of the founding members was Sarah Jane Rees (Cranogwen, 1839-1916) who was born in Llangrannog.

THE GLANNAU CERI TEMPERANCE ASSOCIATION
This organisation was involved in the closure of the Gwernant Arms, Rhydlewis.

DYFED TEMPERANCE ASSOCIATION
This held what was described as ‘Monster Demonstration’ in 1887
Cardigan and Tivyside Advertiser, 5.8.1887, p. 4

THE CARDIGANSHIRE BRANCH OF THE SOUTH WALES WOMEN’S TEMPERANCE ASSOCIATION
This met at Tregaron on Wednesday and Thursday [23rd, 24th June].
Cardigan and Tivyside Advertiser, 25.6.1909, p. 5

THE SOUTH CARDIGANSHIRE AND NORTH PEMBROKESHIRE TEMPERANCE Society
This tried to reduce the opening hours of Cardiganshire Pubs, by closing them at 9 pm instead of 10 pm. They stated that in Haverfordwest, pubs had to close at 9.30 pm. Church groups were also campaigning for a 9 pm closing time.
Cardigan and Tivyside Advertiser, 3.2.1928