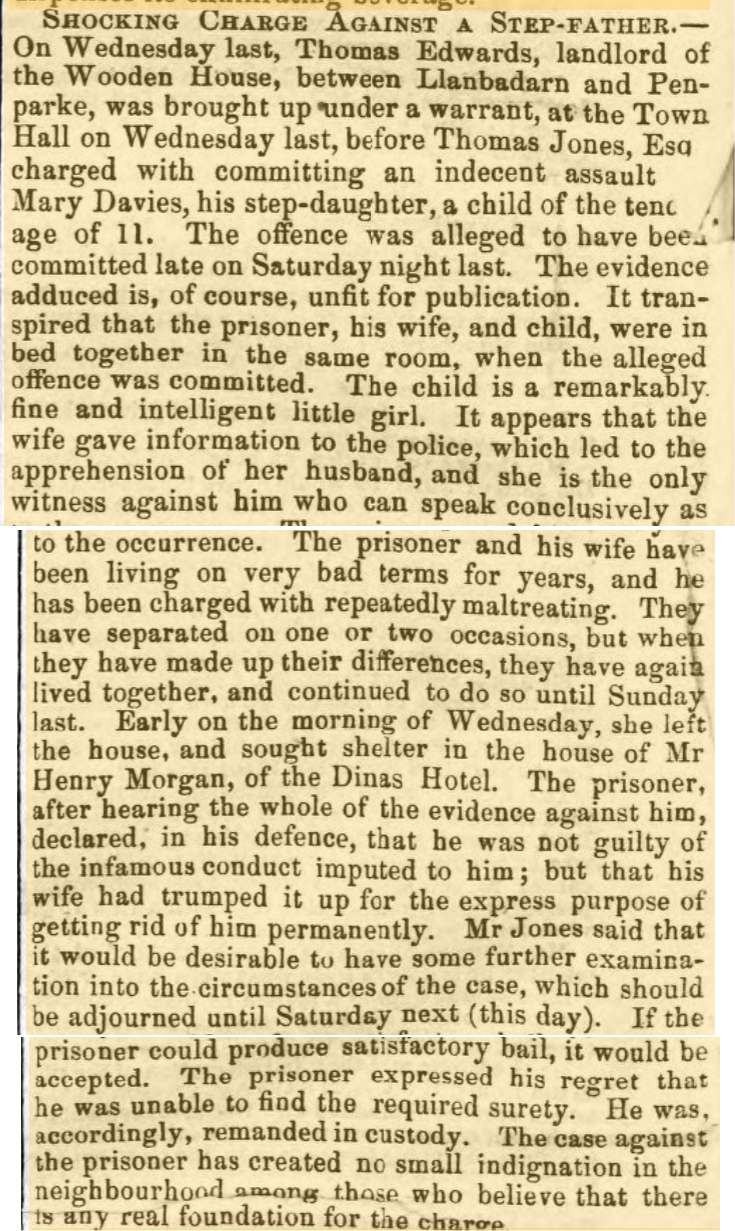 Source: Aberystwyth Observer 04/06/1870       Date: 1870
Copyright:       Type: Newspaper
Description: Thomas Edwards, landlord, charged with indecent assault on his step-daughter, aged 11. Adjourned. Subsequent report shows he was discharged. As Thomas and Catherine are in County Court in early 1871 on a fraud charge it would appear that he was acquitted or the charges were dropped.

Transcript:
SHOCKING CHARGE AGAINST A STEP-FATHER. On Wednesday last, Thomas Edwards, landlord of the Wooden House, between Llanbadarn and Penparke, was brought up "under a warrant, at the Town Hall on Wednesday last, before Thomas Jones, Esq. charged with committing an indecent assault on Mary Davies, his step-daughter, a child of the tender age of 11. The offence was alleged to have been, committed late on Saturday night last. The evidence adduced is, of course, unfit for publication. It transpired that the prisoner, his wife, and child, were in bed together in the same room, when the alleged offence was committed. The child is a remarkably fine and intelligent little girl. It appears that the wife gave information to the police, which led to the apprehension of her husband, and she is the only witness against him who can speak conclusively as to the occurrence. The prisoner and his wife have been living on very bad terms for years, and he has been charged with repeatedly maltreating. They have separated on one or two occasions, but when they have made up their differences, they have again lived together, and continued to do so until Sunday last. Early on the morning of Wednesday, she left the house, and sought shelter in the house of Mr Henry Morgan, of the Dinas Hotel. The prisoner, after hearing the whole of the evidence against him, declared, in his defence, that he was not guilty of the infamous conduct imputed to him; but that his wife had trumped it up for the express purpose of getting rid of him permanently. Mr Jones said that it would be desirable to have some further examination into the circumstances of the case, which should be adjourned until Saturday next (this day). If the prisoner could produce satisfactory bail, it would be accepted. The prisoner expressed his regret that he was unable to find the required surety. He was, accordingly, remanded in custody. The case against the prisoner has created no small indignation in the neighbourhood among those who believe that there is any real foundation for the charge.
Notes:
Linked to
Dinas Hotel , Penparcau Road, Penparcau
Edwards, Catherine and Thomas [-]
Wooden House Inn , Aberystwyth, Llanbadarn Fawr (p)