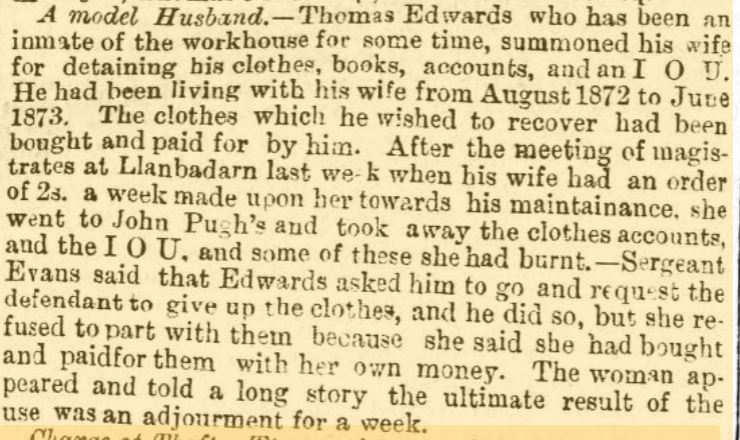 Transcript:
A model Husband.-Thomas Edwards who has been an inmate of the workhouse for some time, summoned his wife for detaining his clothes, books, accounts, and an I O U. He had been living with his wife from August 1872 to June 1873. The clothes which he wished to recover had been bought and paid for by him. After the meeting of magistrates at Llanbadarn last week when his wife had an order of 2s. a week made upon her towards his maintainance, she went to John Pugh's and took away the clothes accounts, and the IOU, and some of these she had burnt. Sergeant Evans said that Edwards asked him to go and request the defendant to give up the clothes, and he did so, but she refused to part with them because she said she had bought and paid for them with her own money. The woman appeared and told a long story the ultimate result of the use was an adjourment for a week.
Notes:
Linked to
Edwards, Catherine and Thomas [-]