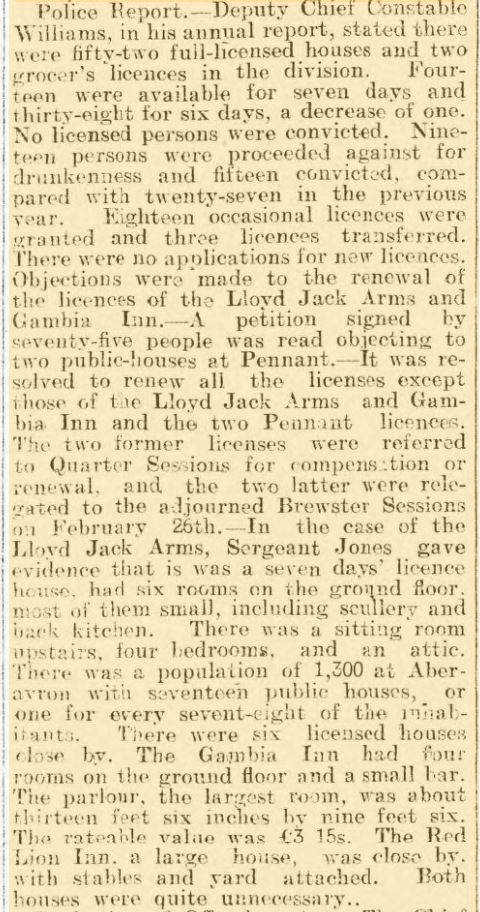 Transcript:
Police Report. Deputy Chief Constable Williams, in his annual report, stated there were fifty-two full-licensed houses and two grocer's licences in the division. Fourteen were available for seven days and thirty-eight for six days, a decrease of one. No licensed persons were convicted. Nine- teen persons were proceeded against for drunkeness and fifteen convicted, compared with twenty-seven in the previous year. Eighteen occasional licences were granted and three Iicences transferred. there were no applications for new licences. Objections were made to the renewal of the licences of the Lloyd Jack Arms and Gambia Inn. A petition signed by seventy-five people was read objecting to two public-houses at Pennant. It was resolved to renew all the licenses except those of the Lloyd Jack Arms and Gambia, Inn and the two Pennant licences. The two former licenses were referred to Quarter Sessions for compensation or renewal, and the two latter were relegated to the adjourned Brewster Sessions on February 26th. In the case of the Lloyd Jack Arms, Sergeant Jones gave evidence that it was a seven days' licence house, had six rooms en the ground floor, most of them small, including scullery and back kitchen. There was a sitting room upstairs, four bedrooms, and an attic. There was a population of 1,300 at Aberayron with seventeen public houses, or one for every seventy-eight of the inhabitants There were six licensed houses close by. The Gambia Inn had four rooms on the ground floor and a small bar. The parlour, the largest room, was about thirteen feet six inches by nine feet six. The rateable value was £3 15s. The Red Lion Inn. a large house, was close by. with stables and yard attached. Both houses were quite unnecessary.
Notes:
Linked to
Aberaeron Licensing Division/
Gambia Inn , 2 Ship Street, Aberaeron
Harbourmaster , 1 Quay Parade (formerly Pier Street, Aberaeron
Lloyd Jack Arms , 11/12 Market Street, Aberaeron