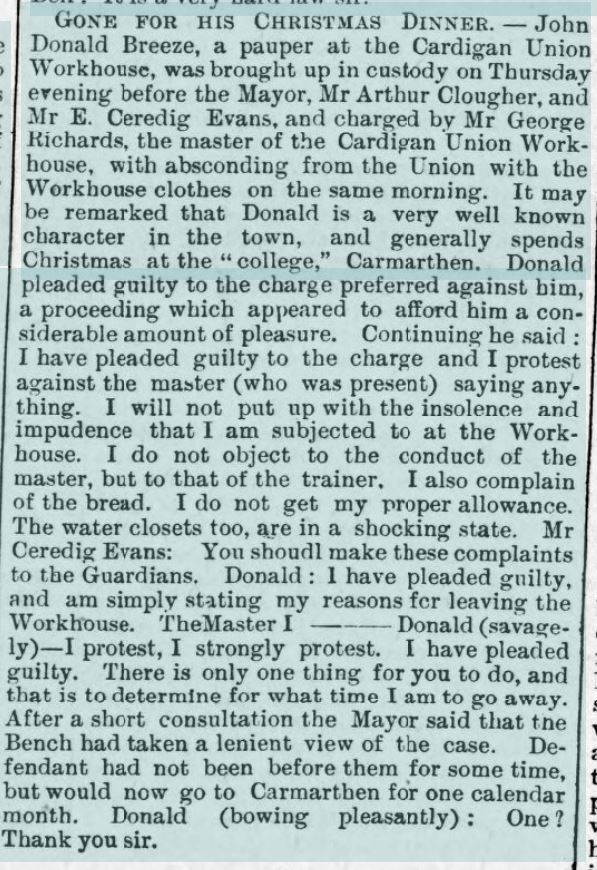 Transcript:
GONE FOR HIS CHRISTMAS DINNER. John Donald Breeze, a pauper at the Cardigan Union Workhouse, was brought up in custody on Thursday evening before the Mayor, Mr Arthur Clougher, and Mr E. Ceredig Evans, and charged by Mr George Richards, the master of the Cardigan Union Workhouse, with absconding from the Union with the Workhouse clothes on the same morning. It may be remarked that Donald is a very well known character in the town, and generally spends Christmas at the college," Carmarthen. Donald pleaded guilty to the charge preferred against bim, a proceeding which appeared to afford him a considerable amount of pleasure. Continuing he said I have pleaded guilty to the charge and I protest against the master (who was present) saying anything. I will not put up with the insolence and impudence that I am subjected to at the Workhouse. I do not object to the conduct of the master, but to that of the trainer. I also complain of the bread. I do not get my proper allowance. The water closets too, are in a shocking state. Mr Ceredig Evans: You should make these complaints to the Guardians. Donald: I have pleaded guilty, and am simply stating my reasons for leaving the Workhouse. The Master: I - Donald (savage- ly) - I protest, I strongly protest. I have pleaded guilty. There is only one thing for you to do, and that is to determine for what time I am to go away. After a short consultation the Mayor said that the Bench had taken a lenient view of the case. Defendant had not been before them for some time, but would now go to Carmarthen for one calendar month. Donald (bowing pleasantly): One? Thank you sir.
Notes:
Linked to
Breeze, John Donald [1843-1907]