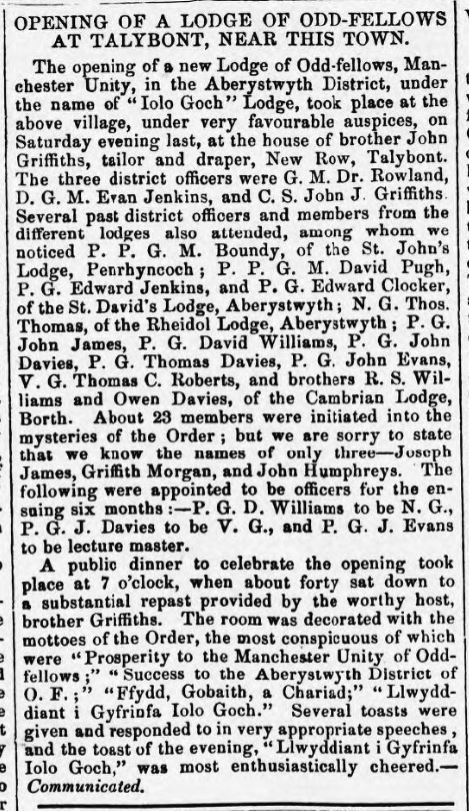 Transcript:
OPENING OF A LODGE OF ODD-FELLOWS AT TALYBONT, NEAR THIS TOWN. The opening of a new Lodge of Odd-fellows, Manchester Unity, in the Aberystwyth District, under the name of "Iolo Goch" Lodge, took place at the above village, under very favourable auspices, on Saturday evening last, at the house of brother John Griffiths, tailor and draper, New Row, Talybont. The three district officers were G. M. Dr. Rowland, D. G. M. Evan Jenkins, and C. S. John J. Griffiths. Several past district officers and members from the different lodges also attended, among whom we noticed P. P. G. M. Boundy, of the St. John's Lodge, Penrhyncoch P. P. G. M. David Pugh, P. G. Edward Jenkins, and P. G. Edward Clocker, of the St. David's Lodge, Aberystwyth N. G. Thos. Thomas, of the Rheidol Lodge, Aberystwyth; P. G. John James, P. G. David Williams, P. G. John Davies, P. G. Thomas Davies, P. G. John Evans, V. G. Thomas C. Roberts, and brothers R. S. Williams and Owen Davies, of the Cambrian Lodge, Borth. About 23 members were initiated into the mysteries of the Order but we are sorry to state that we know the names of only three - Joseph James, Griffith Morgan, and John Humphreys. The following were appointed to be officers for the ensuing six months :-P. G. D. Williams to be N. G., P. G. J. Davies to be V. G., and P. G. J. Evans to be lecture master. A public dinner to celebrate the opening took place at 7 o'clock, when about forty sat down to a substantial repast provided by the worthy host, brother Griffiths. The room was decorated with the mottoes of the Order, the most conspicuous of which were "Prosperity to the Manchester Unity of Odd- fellows Success to the Aberystwyth District of O. F." Ffydd, Gobaith, a Chariad;" "Llwydddiant i Gyfrinfa lolo Goch." Several toasts were given and responded to in very appropriate speeches and the toast of the evening, Llwyddiant i Gyfrinfa Iolo Goch," was most enthusiastically cheered.
Notes:
Linked to
Independent Order of Oddfellows, [-]
Talybont/Tal-y-bont