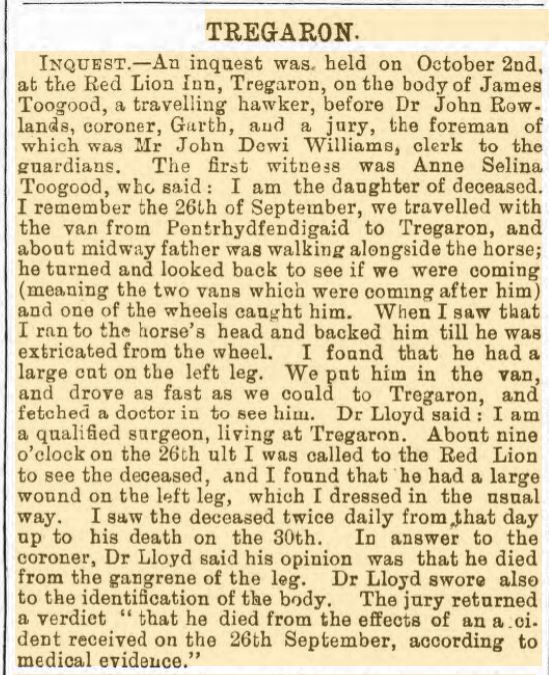 Transcript:
TREGARON. INQUEST. - An inquest was, held on October 2nd, at the Red Lion Inn, Tregaron, on the body of James Toogood, a travelling hawker, before Dr John Row- lands, coroner, Garth, and a jury, the foreman of which was Mr John Dewi Williams, clerk to the guardians. The first witness was Anne Selina Toogood, who said I am the daughter of deceased. I remember the 26Lh of September, we travelled with the van from Pontrhydfendigaid to Tregaron, and about midway father was walking alongside the horse; he turned and looked back to see if we were coming (meaning the two vans which were coming after him) and one of the wheels caught him. When I saw that I ran to the horse's head and backed him till he was extricated from the wheel. I found that he had a large cut on the left leg. We put him in the van, and drove as fast as we could to Tregaron, and fetched a doctor in to see him. Dr Lloyd said I am a qualified surgeon, living at Tregaron. About nine o'clock on the 26th ult I was called to the Red Lion to see the deceased, and I found that he had a large wound on the left leg, which I dressed in the usual way. I saw the deceased twice daily from that day up to his death on the 30th. In answer to the coroner, Dr Lloyd said his opinion was that he died from the gangrene of the leg. Dr Lloyd swore also to the identification of the body. The jury returned a verdict that he died from the effects of an accident received on the 26th September, according to medical evidence."
Notes:
Linked to
Red Lion Inn , Tregaron