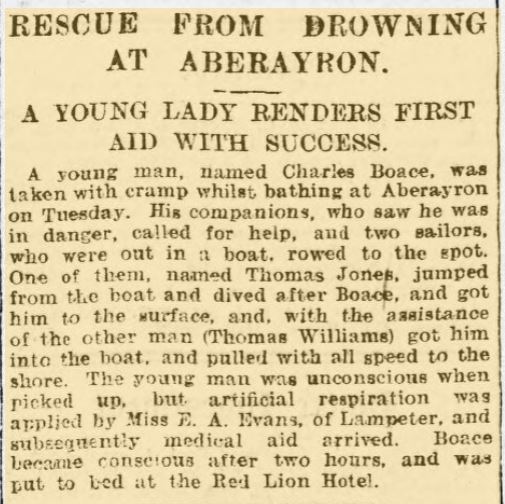 Transcript:
RESCUE FROM DROWNING AT ABERAYRON. A YOUNG LADY RENDERS FIRST AID WITH SUCCESS. A young man, named Charles Boace. was taken with cramp whilst bathing at Aberayron on Tuesday. His companions, who saw he was in danger, called for help, and two sailors, who were out in a boat, rowed to the spot. One of them, named Thomas Jones, jumped from the boat and dived after Boace, and got him to the surface, and, with the assistance of the other man (Thomas Williams) got him into the boat, and pulled with all speed to the shore. The young man was unconscious when picked up, but artificial respiration was applied by Miss E. A. Evans, of Lampeter, and subsequently medical aid arrived. Boace became conscious after two hours, and was put to bed at the Red Lion Hotel.
Notes:
Linked to
Harbourmaster , 1 Quay Parade (formerly Pier Street, Aberaeron