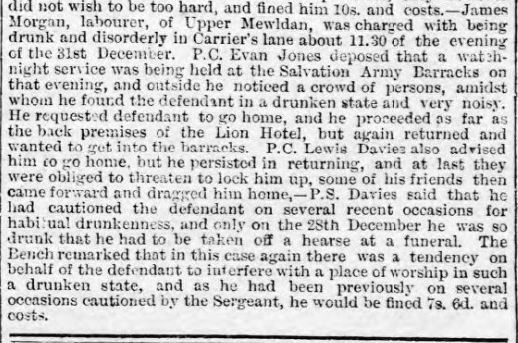 Transcript:
James Morgan, labourer, of Upper Mewldan, was charged with being drunk and disorderly in Carrier's lane about 11.30 of the evening of the 31st December. P.O. Evan Jones deposed that a night service was being held at the Salvation Army Barracks on that evening, and outside he noticed a crowd of persons, amidst whom he found the defendent in a drunken state and very noisy. He requested defendant to go home, and he proceded:ls far as the back premises of the Lion Hotel, but again returned and wanted to to into the barracks. P.C. Lewls Davies also advised him to go home. but he persisted in returning, and at last they were obliged to threaten to lock him up, some of his friends then came forward and dragged him home, P.S. Davies said that he had cautioned the defendant on several recent occasions for habiltual drunkenness, and only on the 28th December he was so drunk that he had to be taken off a hearse at a funeral. The Bench remarked that in this case again there was a tendency on behalf of the defendant to interfere with a place of worship in such a drunken state, and as he had been previously on several occasions cautioned by the Sergeant, he would be fined 7s. 6d. and costs"
Notes:
Linked to
Cardigan/Aberteifi