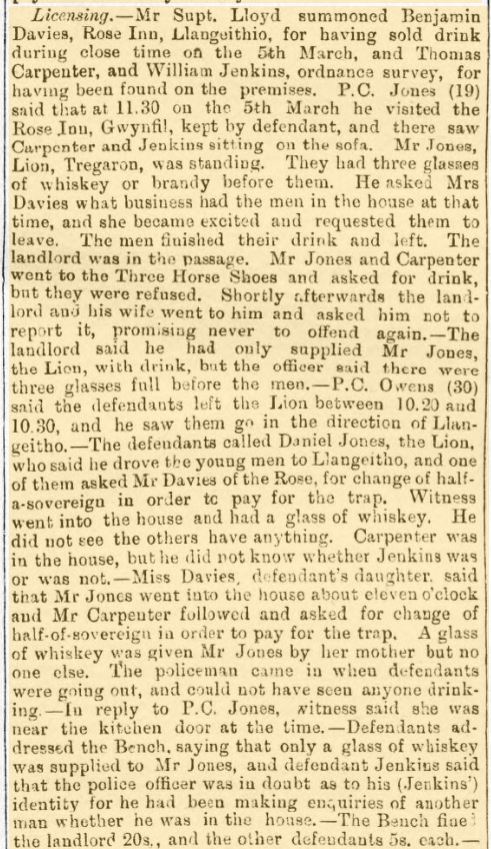 Transcript:
Licensing. Mr Supt. Lloyd summoned Benjamin Davies, Rose Inn, Llangeithio, for having sold drink during close time on the 5th March, and Thomas Carpenter, and William Jenkins, ordnance survey, for having been found on the premises. P.C. Jones (19) said that at 11.30 on the 5th March he visited the Rose Inn, Gwynfil, kept by defendant, and there saw Carpenter and Jenkins sitting on the sofa. Mr Jones, Lion, Tregaron, was standing. They had three glasses of whiskey or brandy before them. He asked Mrs Davies what business had the men in the house at that time, and she became excited and requested them to leave. The men finished their drink and left. The landlord was in the passage. Mr Jones and Carpenter went to the Three Horse Shoes and asked for drink, but they were refused. Shortly afterwards the landlord and his wife went to him and asked him not to report it, promising never to offend again -The landlord said he had only supplied Mr Jones the Lion, with drink, but the officer said there were three glasses full before the men. P.O. Owens (30) said the defendants left the Lion between 10.20 aud 10.30, and he saw them go in the direction of Llangeitho. The defendants called Daniel Jones, the Lion, who said he drove the young men to Llangeitho, and one of them asked Mr Davies of the Rose, for change of half- a-sovereign in order to pay for the trap. Witness went into the house and had a glass of whiskey. He did not see the others have anything. Carpenter was in the house, but lie did rot know whether Jenkins was or was not. Miss Davies, defendant's daughter, said that Mr Jones went into the house about eleven o'clock and Mr Carpenter followed and asked for change of half-a-sovereign in order to pay for the trap, A glass of whiskey was given Mr Jones by her mother but no one else. The policeman came in when defendants were going out, and could not have seen anyone drinking. In reply to P.C. Jones, witness said she was near the kitchen door at the time. Defendants addressed the Bench, saying that only a glass of whiskey was supplied to Mr Jones, and defendant Jenkins said that the police officer was in doubt as to his (Jenkins') identity for he had been nuking enquiries of another man whether he was in the house. The Bench fined the landlord 20s., and the other defendants 5s. cash
Notes:
Linked to
Llanvaughan Arms , Llanwenog
Rose Inn , Llangeitho
Three Horse Shoe , Llangeitho