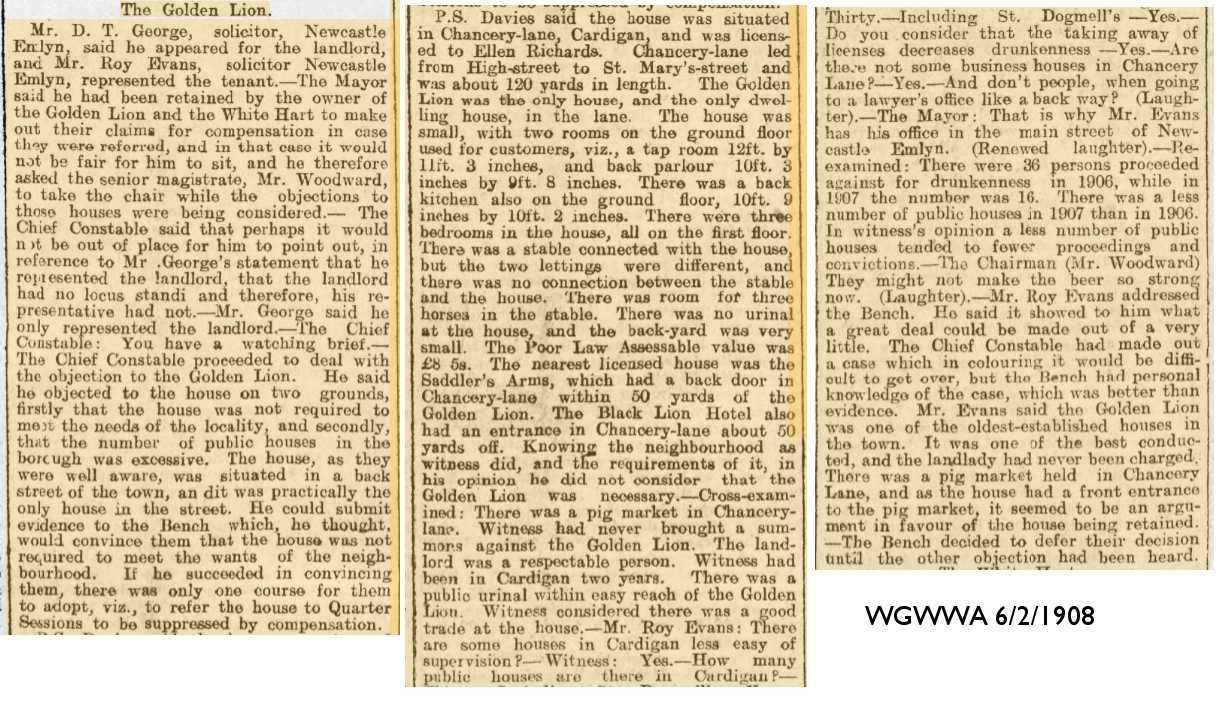 Transcript:
The Golden Lion.
Mr. D. T. George, solicitor, Newcastle Emlyn, said he appeared for the landlord, and Mr. Roy Evans, solicitor Newcastle Emlyn, represented the tenant. The Mayor said he had been retained by the owner of the Golden Lion and the White Hart to make out their claims for compensation in case they were referred, and in that case it would not be fair for him to sit, and he therefore asked the senior magistrate, Mr. Woodward, to take the chair while the objections to those houses were being considered. The Chief Constable said that perhaps it would not be out of place for him to point out, in reference to Mr .George's statement that he represented the landlord, that the landlord had no locus standi and therefore, his representative had not. Mr. George said he only represented the landlord. The Chief Constable You have a watching brief. The Chief Constable proceeded to deal with the objection to the Golden Lion. He said he objected to the house on two grounds, firstly that the house was not required to meet the needs of the locality, and secondly, that the number of public houses in the bore ugh was excessive. The house, as they were well aware, was situated in a back street of the town, and it was practically the only house in the street. He could submit evidence to the Bench which, he thought, would convince them that the house was not required to meet the wants of the neighbourhood. If he succeeded in convincing them, there was only one course for them to adopt, viz., to refer the house to Quarter Sessions to be suppressed by compensation. P.S. Davies said the house was situated in Chancery-lane, Cardigan, and was licensed to Ellen Richards. Chancery-lane led, from High-street to St. Mary's-street and was about 120 yards in length. The Golden Lion was the only house, and the only dwelling house, in the lane. The house was small, with two rooms on the ground floor used for customers, viz., a tap room 12ft. by lift. 3 inches, and back parlour 10ft. 3 inches by ft. 8 inches. There was a back kitchen also on the ground floor, 10ft. 9 inches by 10ft. 2 inches. There were three bedrooms in the house, all on the first floor. There was a stable connected with the house, but the two lettings were different, and there was no connection between the stable and the house. There was room for three horses in the stable. There was no urinal at the house, and the back-yard was very small. The Poor Law Assessable value was £8 5s. The nearest licensed house was the Saddler's Arms, which had a back door in Chancery-lane within 50 yards of the Golden Lion. The Black Lion Hotel also had an entrance in Chancery-lane about 50 yards off. Knowing the neighbourhood as witness did, and the requirements of it, in his opinion he did not consider that the Golden Lion was necessary. Cross-examined: There was a pig market in Chancery-lane. Witness had never brought a summons against the Golden Lion. The landlord was a respectable person. Witness had been in Cardigan two years. There was a public urinal within easy reach of the Golden Lion. Witness considered there was a good trade at the house.
Mr. Roy Evans: There are some houses in Cardigan less easy of supervision? Witness: Yes. How many public houses are there in Cardigan ? Thirty. Including St. Dogmell's Yes. Do you consider that the taking away of licenses decreases drunkenness Yes. Are not some business houses in Chancery Lane? Yes. And don't people, when going to a lawyer's office like a back way ? (Laughter). The Mayor: That is why Mr. Evans has his office in the main street of Newcastle Emlyn. (Renewed laughter). Re- examined: There were 36 persons proceeded against for drunkenness in 1906, while in 1907 the number was 16. There was a less number of public houses in 1907 than in 1906. In witness's opinion a less number of public houses tended to fewer proceedings and convictions. The Chairman (Mr. Woodward) They might not make the beer so strong now. (Laughter). Mr. Roy Evans addressed the Bench. Ho said it showed to him what a great deal could be made out of a very little. The Chief Constable had made out a case which in colouring it would be difficult to get over, but the Bench had personal knowledge of the case, which was better than evidence. Mr. Evans said the Golden Lion was one of the oldest-established houses in the town. It was one of the best conducted, and the landlady had never been charged. There was a pig market held in Chancery Lane, and as the house had a front entrance to the pig market, it seemed to be an argument in favour of the house being retained. The Bench decided to defer their decision until the other objection had been heard.
Notes:
Linked to
Golden Lion , Chancery Lane, Cardigan