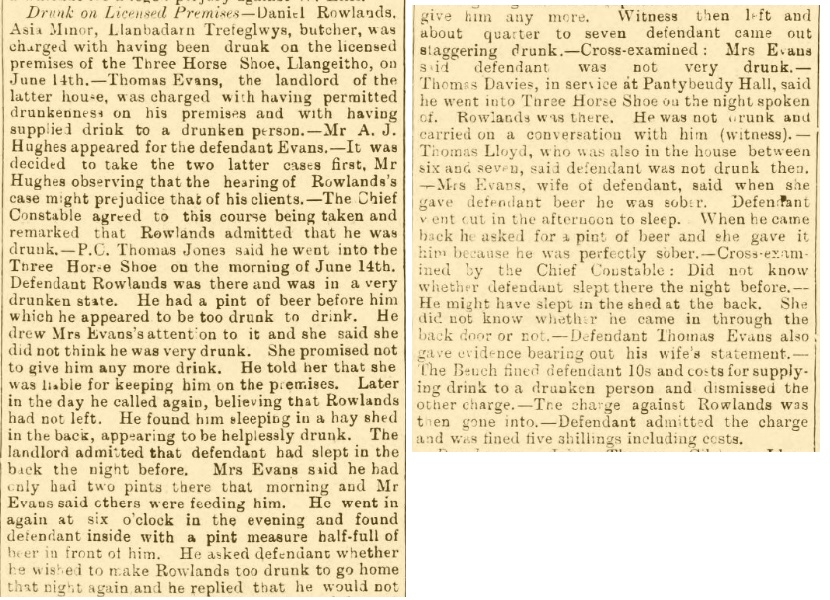 Transcript:
Drunk on Licensed Premises Daniel Rowlands, Asia Minor, Llanbadarn Trefeglwys, butcher, was charged with having been drunk on the licensed premises of the Three Horse Shoe, Llangeitho, on June 14th.-Thomas Evans, the landlord of the latter house, was charged with having permitted drunkenness on his premises and with having supplied drink to a drunken person. Mr A. J. Hughes appeared for the defendant Evans. It was decided to take the two latter cases first, Mr Hughes observing that the hearing of Rowlands's case might prejudice that of his clients. The Chief Constable agreed to this course being taken and remarked that Rowlands admitted that he was drunk.-P.C. Thomas Jones said he went into the Three Horse Shoe on the morning of June 14th. Defendant Rowlands was there and was in a very drunken state. He had a pint of beer before him which he appeared to be too drunk to drink. He drew Mrs Evans's attention to it and she said she did not think he was very drunk. She promised not to give him any more drink. He told her that she was liable for keeping him on the premises. Later in the day he called again, believing that Rowlands had not left. He found him sleeping in a hay shed in the back, appearing to be helplessly drunk. The landlord admitted that defendant bad slept in the back the night before. Mrs Evans said he had only had two pints there that morning and Mr Evans said others were feeding him. He went in again at six o'clock in the evening and found defendant inside with a pint measure half-full of beer in front of him. He asked defendant whether he wished to make Rowlands too drunk to go home that night again and he replied that he would not give him any more. Witness then left and about quarter to seven defendant came out staggering drunk. Cross-examined Mrs Evans said defendant was not very drunk. Thomas Davies, in service at Pantybeudy Hall, said he went into Three Horse Shoe on the night spoken of. Rowlands was there. He was not drunk and carried on a conversation with him (witness). Thomas Lloyd, who was also in the house between six and seven, said defendant was not drunk then. Mrs Evans, wife of defendant, said when she gave defendant beer he was sober. Defendant went out in the afternoon to sleep. When he came back he asked for a pint of beer and she gave it him because he was perfectly sober. Cross-examined by the Chief Constable Did not know whether defendant slept there the night before. He might have slept in the shed at the back. She did not know whether he came in through the back door or not. Defendant Thomas Evans also gave evidence bearing out his wife's statement. The Bench fined defendant 10s and costs for supplying drink to a drunken person and dismissed the other charge. The charge against Rowlands was thn gone into. Defendant admitted the charge and was fined five shillings including costs.
Notes:
Linked to
Rowlands, Daniel [1822-1917]
Three Horse Shoe , Llangeitho