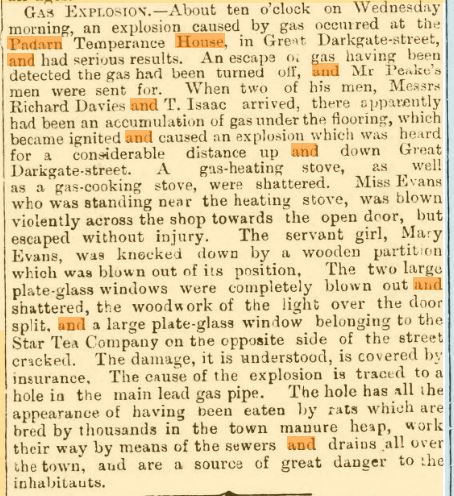 Transcript:
GAS EXPLOSION.—About ten o’clock on Wednesday morning, an explosion caused by gas occurred at the , Padarn Temperance House, in Great Darkgate-street,
and had serious results. An escape of gas having been detected the gas had been turned off, and Mr Peake’s men were sent for. When two of his men, Messrs Richard Davies and T. Isaac arrived, there apparently had been an accumulation of gas under the flooring, which became ignited and caused an explosion which was heard for a considerable distance up and down Great Darkgate-street. A gas-heating stove, as well as a gas-cooking stove, were shattered. Miss Evans who was standing near the heating stove, was blown violently across the shop towards the open door, but escaped without injury. The servant girl, Mary Evans, was knocked down by a wooden partition which was blown out of its position. The two large plate-glass windows were completely blown out and shattered, the woodwork of the light over the door split, and a large plate-glass window belonging to the Star Tea Company on the opposite side of the street cracked. The damage, it is understood, is covered by insurance. The cause of the explosion is traced to a hole in the main lead gas pipe. The hole has all the appearance of having been eaten by rats which are bred by thousands in the town manure heap, work their way by means of the sewers and drains all over the town, and are a source of great danger to the inhabitants.