Notes: 1872
Morgan Jones applied to transfer his licence from the Ivy Bush to new premises.
1873
Morgan Jones applied for an ale-house licence with the name 'New Ivy Bush'. Objections from the Ivy Bush [show pub] as it was too close. Refused. Is there a connection here to the later name 'New Bush'?
1875 and 1877
Morgan Jones fined £10 for selling drink without a licence
1876
Morgan Jones applies for Licence to sell drink and run an Inn
1882 "TREGARON. READING Room. This institution was formally opened on Monday, the 17th April, in a room belonging to the New Bush, and next door to the Town Hall. To all appearances it will live, although the talk about the town is that it will surely die." CN 21 April 1882
1890 advert: "Domesticated Young Person Desires Situation, as Barmaid; experienced; would assist light household duties. - Please state terms, Miss Davis, New Bush Hotel, Tregaron." Western Mail 15 Nov 1890
1895
Court report: "George Jackson, who refused to give his address, was brought up on remand, charged by Miss Ceynon Davids, Temperance House, Tregaron, with having stolen money from her, amounting to 19s 6d, on Thursday, June 6th. Prosecutrix said she kept a coffee tavern at Tregaron." CBV 18 June 1895
1902 Death: "JONES On February 12th, at the New Bush Temperance House, Tregaron, Mrs Mary Jones, widow of the late Mr Morgan Jones, aged 84 years. " CN 14 Feb 1902
1916
David Roberts of Temperance House convicted of drinking outside hours at the Railway Inn

Application for a drinks licence

Charged with selling outside permitted hours 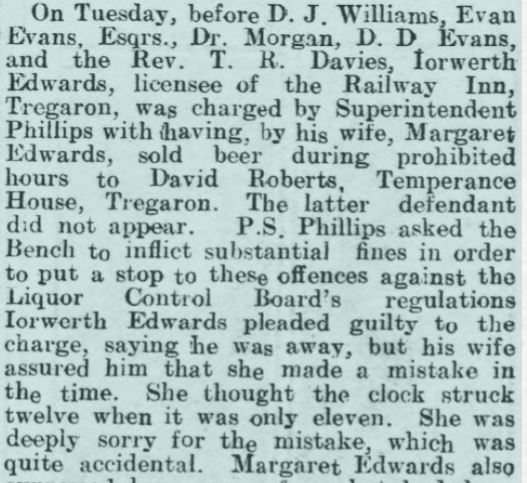 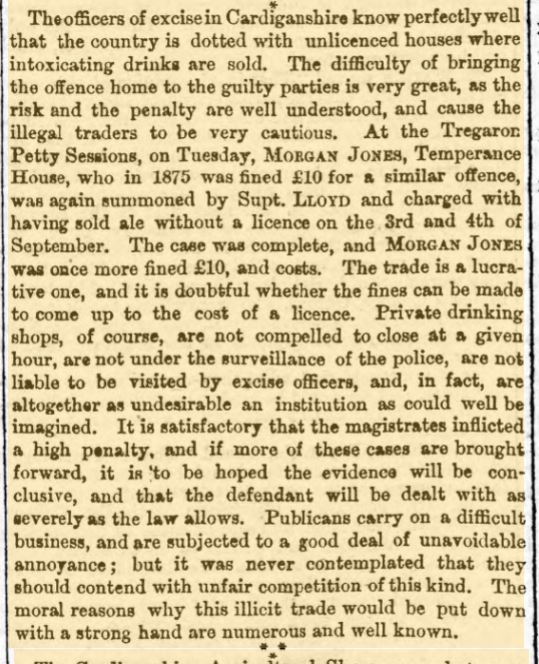 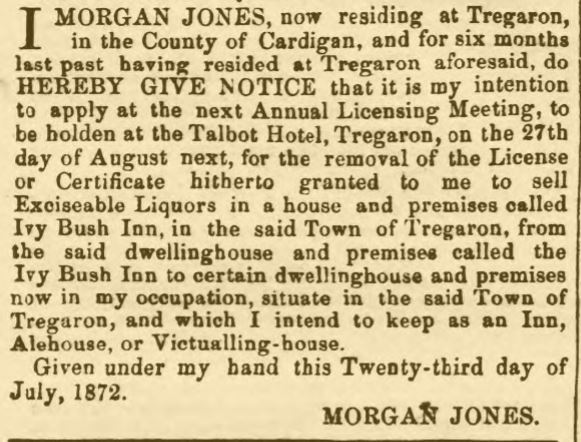