1865?
John Jones prop, died (see below)
1866
Complicated court case! Refers to John Jones senior and junior. Anna Maria Jones is widow of jun. who died 20 July 1865. She had lived at Globe 16 years last June.[1850?] AO 6 Oct 1866
1867
Mrs Jones prop (see below)
1870
Inheritance court case
"It appears that a John Jones, senior, of the Globe Inn, Aberystwyth, who made a will which was proved on the 22nd of May, 1865, bequeathed all his property whatsoever and wheresoever unto Edward Mason, upon the trusts therein mentioned, under which his wife Elizabeth Jones, was to receive out of the income of the property £20 a-year during her life, and his son John Jones 7s. a week during his life, out of the proceeds of the business at the Globe Wine Vaults. The testator directed that his wife should have the control and management during her life, and after her decease his daughter- in-law, Anna Maria, the wife of his son John, should during her life, have the control and management of the said business, and subject to the before-mentioned trusts, upon trust as to all his property for his grandson John Thomas Jones absolutely,"
1870
Mentioned in a court case. Richard Hughes of the Globe Inn sueing...mentions his sister Mrs Jones was in occupation of the Globe in 1867 (but in pecuniary embarassment). Mrs Jones then married a Mr Newall.
1870
"Susannah Morgans, a servant at the Globe Inn, was summoned by Anne Williams, wife of John Williams, of Britannia-court, for annoying her and making use of abusive language, Complainant said she lived in the lower part of a small house in Britannia-court. About five o'clock in the after- noon of the previous Thursday, the defendant came to visit her mother, who resided upstairs in the same house. Soon after defendant entered some dirty water came down through the flooring into the apartment occupied by the complainant. The defendant also shook the wooden out- kitchen with great force, and afterwards made use of most filthy and abusive language towards complainant.The defendant denied the charge.His worship not being satisfied that the complainant had proved her case, dis- missed it accordingly." Aberystwyth Times 30 April 1870
1870
Edward Vaughan Rees prop. Advert refers to 'Old-established Vaults'
1873
"The following appear amongst the petitions for liquidation by arrangement :-Edw. Vaughan Rees, innkeeper and lapidary, the Globe Inn,-Market-street, Aberystwyth (attorneys: H. Hughes and Son, North Parade, Aberystwyth);" CN 21/03/1873

1882
For sale: "all that dwelling house...formerly known as the Globe Inn' 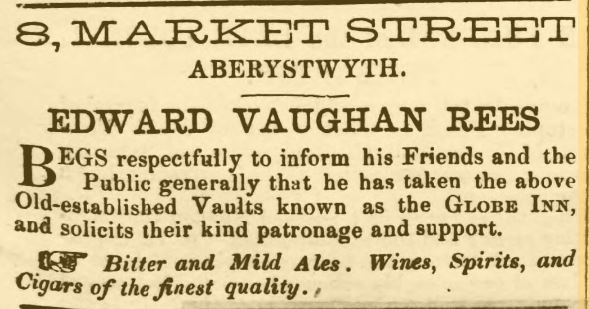