Did it move from one bank of the river to the other in the early 1830s?

1843
"BECCA: MEETING OF THE MAGISTRATES AND DELEGATES AT NEWCASTLE EMLYN A meeting of the county magistrates and delegates from the several parishes was held, by appointment, at the Salutation Inn, in Newcastle Emlyn, on Friday last The meeting was attended by about twenty county magistrates and a number of delegates. Mr. Lloyd Hall, barrister, who has been retained by the delegates of some of the parishes, was also present. The Honourable Colonel Trevor, M.P., Vice-Lieutenant, took the chair, and explained the purpose for which the meeting was held, and the determination of the magistrates. He said he felt extremely sorry to appear before them in his capacity of civil representative of the county in the present posture of affairs, the like of which he had not witnessed for twenty years and upwards. It was with great pain he had learned that the men of this county had not only forgotten what was due to the majesty of the law, but also what was due to their own characters, as peaceable and dutiful subjects..." Welshman 30 June 1843

1897
"At Newcastle-Emlyn, for instance. Williams Pantycelyn preached his first sermon at the Salutation Hotel, then called the Bridgend. It was a stormy day, and the poet was so well wrapped in shawls that many took him for a Mari Lwyd Lawen." Weekly Mail 24 July 1897

Duel over a barmaid 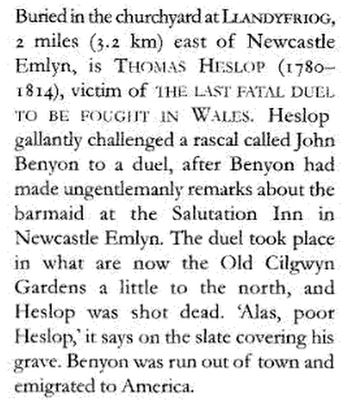