Notes: 1849
"On the 24th instant, as Mr. Stephens and Mr. Heale were proceeding on their duties, and when near the gaol, they observed two women, named Alban, daughters of Owen Alban, of Verwick, who were carrying bags full of grain, and from their suspicious demeanor they stopped them, and found them with about a bushel of malt each."
Welshman 30 March 1849 - see att

1854
"The Queen versus Owen Alban. Mr. Mitchell, solicitor, Cardigan, appeared on behalf the Crown, and stated that the charge against the defendant was for having six bushels of illicit malt upon his premises at Heolas, Verwick. The defendant pleaded guilty to the charge. He was fined in the mitigated penalty of £50 with a recommendation that the penalty be further reduced to £10."
Welshman 6 Oct 1854

[six bushels would be about 100kg, probably enough for about a couple of barrels of beer] 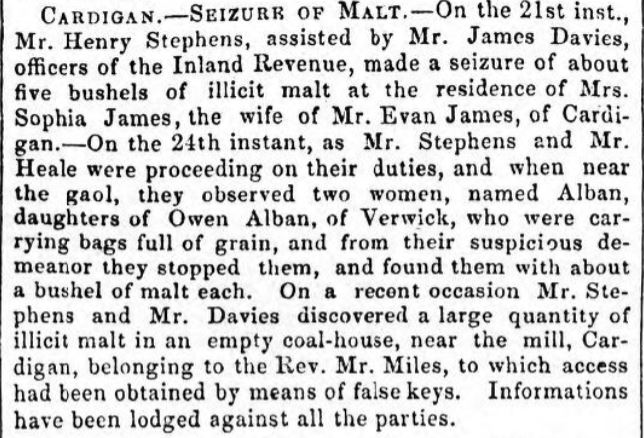