Other names: Dolmeddig
Address/Location:
OS Grid Ref: SN3167253993
Opened: c.
Closed: c. 1850       Type: Beerhouse
Summary: Referred to in J Geraint Jenkins, 'Llangrannog - some aspects in the development of a coastal village" in Ceredigion iii p.232 1956 "As recently as 1890 the village possessed its own public house, Dolmeddyg, the last publican being David Jones-Dafi Doctor"

Anne seems to have married...

1903
[Sanitary Inspector] A house called Dolmeddig, in the parish of Llangranog, was used as a lodging-house. He visited the place, and considered it a proper lodging- house. WGWWA 24 Sept 1903
1904
Obituary of Anne Richards. 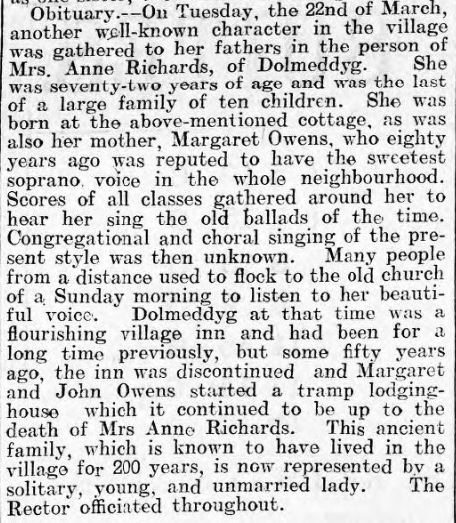