Seems to have closed prior to 2017

Notes: 1797
Building erected "A little further on than this Chapel is the white washed Crown Inn Over its front door is an inscribed stone: LLWYN DAFYDD. THIS HOUSE WAS BUILT. ON THE EXPENCE OF EVAN AND ELINOR JENKINS A.D 1797" see att.

1875
"Licensing Offence. P.C. T. Jones (27) charged Francis Evans, landlord of the Crown Inn, Llwyn-dafydd, for keeping his house open for the sale of beer during prohibited hours on the night of the 8th inst. Fined £3 and costs, and the conviction to be endorsed on the license.
The same constable also charged William Lewis, Gelle, John Jones, Llwyndu, David Lewis and Evan Evans, Pendderw, in the parish of Llandissiliogogo, John Evans.Trawsnant, Llanllwchaiarn, and David Rees, Castell, Llangranog, for being at the Crown Inn during prohibited hours on the day above mentioned. Fined 10s. each and costs." Aber Obs 27 Feb 1875

Between 1881 and 1889, Francis died, and Mary Anne took over the licence. She then re-married, and kept the licence in her name.

1889
"CATTLE STEALING.-On the night of the 7th of May last, six head of cattle were stolen from Penbaily-fach Farm, near Newcastle-Emlyn, and for the recovery, of which a reward of £5 was offered. During the present week P.C. Thomas (32), Blaenporth, and Sergt. Davies, Cardigan, succeeded in tracing them through the county to Bola-fron Farm, Ferwig, an out-of-the-way place, where they had been taken a fortnight previously by two young men, who were unknown to the tenant of Bolafron, and they requested him to allow the cattle to graze on the farm until they were sent for by Mr. Enos Davies, an innkeeper, residing at Llwyndafydd, near New Quay. The cattle were seized by the police on Wednesday, and brought to Cardigan en route for Newcastle-Emlyn. Great praise is due to the police for their energy and perseverance in tracing the cattle, and it is to be hoped that their labours will result in the offenders being brought to justice."Cgn Obs 8 June 1889

1890
"The bankrupt's gross liabilities amounted to £1,270, and his deficiency to £1,213 odd. Enos George Davies, the debtor, said he lived at Llwyndafydd, Cross Inn, Llandyssul, where he had a public-house. He was a woollen manufacturer, and had been buying butter and cheese. He had also sold seeds, and was a wool merchant. He had also sold indigo and oil and hops. He had been a farmer as well, and a coal merchant. His wife kept the public-house at Llwyndafydd, and he had nothing to do with the innkeeper's business, and never ordered goods for the public-house. He ordered six casks of beer from Messrs Robinson and Co., of Burton, last summer, but not for the public-house. His wife brewed her own beer. He ordered this beer for a man who had an inn near his place and who had a ship of his own, in which he brought him three loads of culm. He had no other dealings in beer.
...he got married and went to live at Llwyndafydd. That was about seven years and a half ago
... Two years after he went to Llwyndafydd he bought a public house premises, called "Shop,"[sic: Ship?] at Llangranog, for £ 750. Two years ago last summer he sold it for about £830. For that money he had a mortgage of £400, and paid back a loan of £250 he had from his brother-in-law.
...The public-house kept by his wife was not sufficient to keep them" Welshman 18 April 1890

1891
"Being unlawfully on licenced premises. Daniel Davies, London, Owen Jones, Cwmcynon, and Benjamin Jones, Cwmcynon, were charged with being at the Crown Inn, Llwyndafydd, at about 1.30 a.m. on August 0th. Fined 10s. each and costs. Mary Anne Davies, the landlady of the Crown, was fined 20s. and costs for permitting them to be there." CN 28 Aug 1891 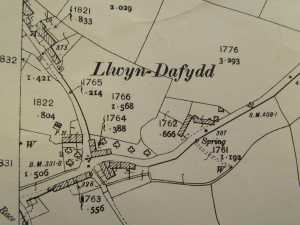 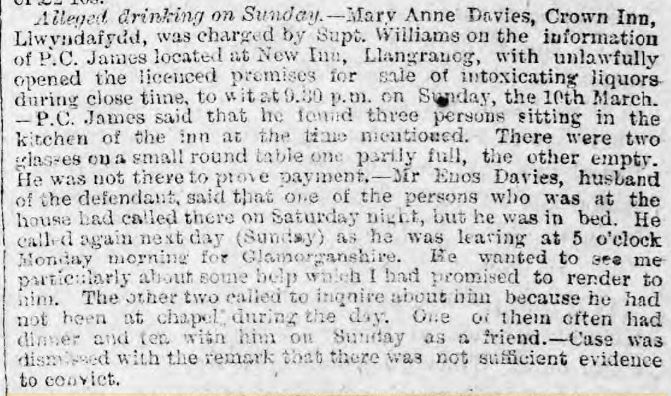 Drunk and riotous, not serving 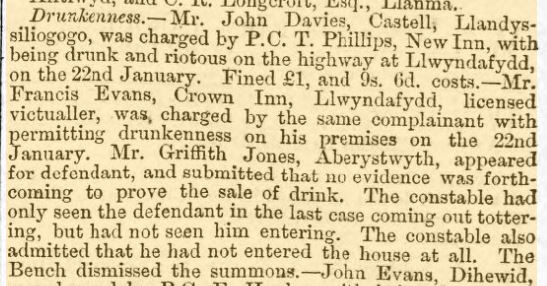 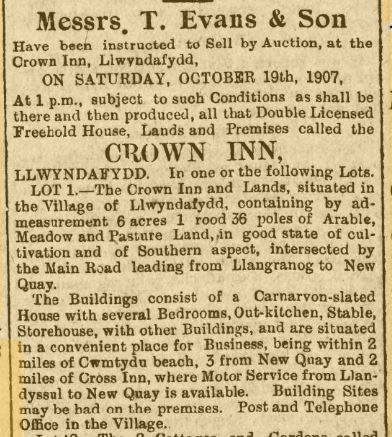 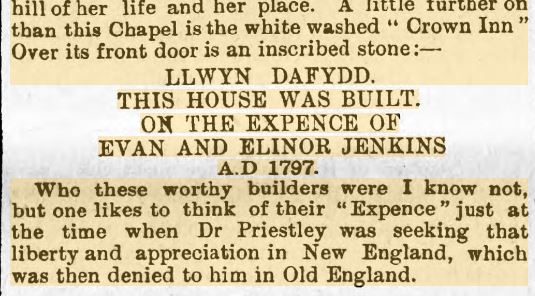 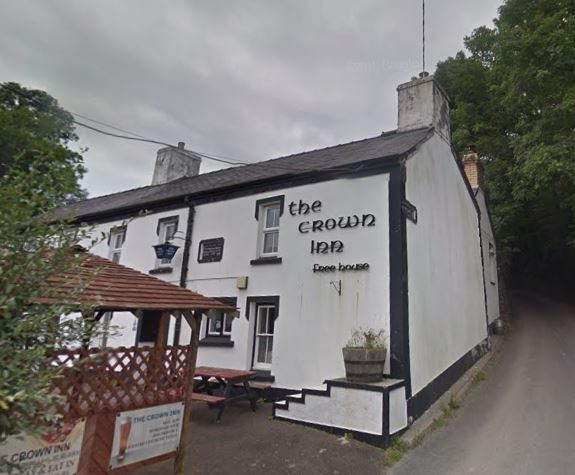