Notes: 1845
"CARDIGAN.—On the 31st ult. the following parish officers appointed for the ensuing year for the parish of Saint Mary, in Cardigan:—Mr. John Davies, innkeeper, Quay-street, and Mr. John Jones, formerly landlord of the Black Lion Hotel, to be overseers of the poor" Pembs Herald 11 April 1845

1846
True Ivorites conference: "After the service the procession was joined by many distinguished visitors, and having paraded the principal streets of the town, they proceeded to the Crown Inn, where the visitors took refreshment and departed highly delighted with their cordial reception. The dinner was ordered at three o'clock, when upwards of one hundred of the brethren sat down to an excellent social entertainment." Pembs Herald 22 May 1846

1850
"CARDIGAN. On Friday afternoon as a cart, returning from this town to Penallt, near Kilgerran, was going over the bridge, it accidently upset, and threw the driver. John Davis, to the ground, by which he received a severe concussion on the brain. He was taken to the house of Mrs. Thomas, bonnet maker. Bridge Parade, and attended by Mr. N. L. Noot, surgeon, and his assistant, who dressed his wounds; after which he was removed to the Crown Inn, where he now lies in a precarious state. " Pembs Herald 11 Oct 1850


1880
"CHARGE OF STEALING FROM THE PERSON, On Thursday, the 9th inst, at the Guildhall (before the Mayor, Mr W. P. Evans, Mr Levi James, and Mr W. Wood- ward), Thomas Howell Phillips, clerk, residing at Greenfield-square, was brought up under a warrant charged with stealing two sovereigns from the person of Capt Rowland Roberts, of Portmadoc, at the Crown Inn, on the previous Tuesday evening. Prisoner was remanded until Friday, when, after a protracted hearing, he pleaded guilty. The deed being one of peculiar daring, the prosecutor being supposed to be asleep at the time, he was sentenced to one month's imprisonment with hard labour in Carmarthen gaol." Welshman 17 Dec 1880

1908
"CROWN INN, CARDIGAN. The total amount claimed in this case was put at £ 528 14s. 0d., made up of trade profits £227 14s. 0d., rent £ 286, and trade fixtures £ 15. Mrs Elizabeth Davies, the tenant was called and said she took the house in February last and had been doing good business. Mr Evans of Cardigan, gave evidence as to the trade now done, which he said had made considerable headway. The registered owners are Messrs Allsopps and Sons, and Mr Hindley their agent, was in attendance at the Court." AO 17 Sept 1908 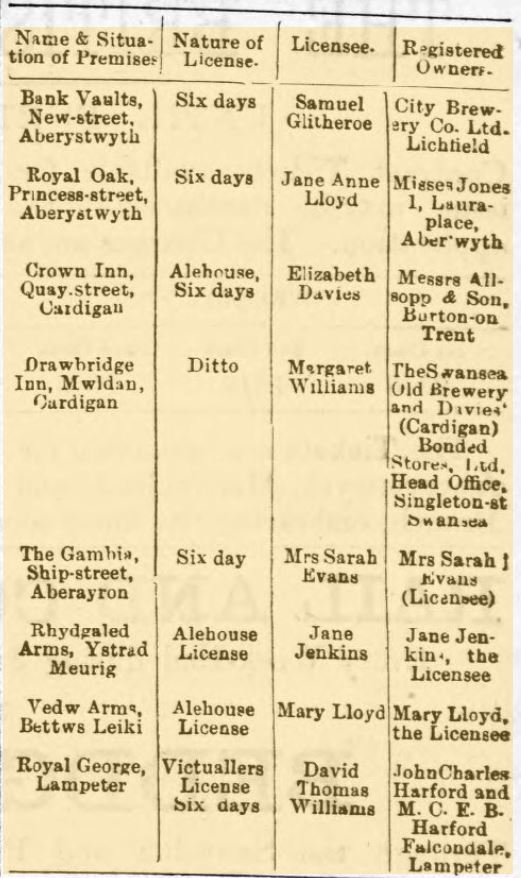