Notes: 1850
"Marriages: On the 23d inst., at Saint Mary's Church, Cardigan, by the Rev. Griffith Thomas, Mr. William Walker, late of the Royal Navy, and now of the Half Moon Inn, to Mary, eldest daughter of Mr. Thomas Davies, of the Noyadd Arms, Cardigan." Welshman 29 Nov 1850

1876
"OBSTRUCTING THE HIGHWAY.—On Monday last, at the Borough Petty Sessions. a,t the Guild Hall. before James Williams, Esq. (Mayor), Asa J. Evans (ex-Mayor), J. Davies, and John Thomas, Esqrs., the following cases were heard/—Joseph Rhys James, Borough Inspector of Highways, was charged by Mr. D. G. Davies, Castle- green, with neglect of duty, by permitting a nuisance, that is, s, quantity of dung, to be deposited in Green- street, in this town, on Wednesday, the 6th inst. Mr. J. A. G. Evans appeared for defendant, and pleaded that neither the information nor summons disclosed any breach of duty, and quoted the case of Morgan v. Leach," from the Law, Journal and Justice of the Peace. Complainant deposed that Green-street was the only carriage road to his residence, Castle-green, and that on the day in question most offensive manure was carried out of the "Half Moon Inn, and placed in the street, which made it impossible for a carriage to pass. It was about 11 o'clock in the morning. Mr Evans submitted there was no case. The case was dismissed, but costs were not allowed on either side.—Joseph Rhys James, defendant in the last case, v. William Davies, "Half Moon" Inn, Green-street, for unlawfully obstructing the highway, by depositing a quantity of manure thereon, on Wednesday, the 6th inst. This case was the one referred to above Mr. Evans again appeared for the complainant, and Mr. D. G. Davies was called as a witness. This was the first case brought before the magistrates under the 72nd section of the General Highway Act, and as they did not wish to inflict a heavy penalty, defendant was only fined 6d. and costs. The Magistrates expressed a hope that this decision would be a caution to people not to allow a large quantity of manure to accumulate on their premises. " CN 15 Dec 1876

1894
"Brandy Under Proof: David Williams, D.C.C., Llandyssul, charged William Morris, landlord of the Half Moon, Cardigan, with selling brandy to one Thomas Jones, on the 14th ult., adulterated with water 32 degrees under proof. David Williams said that he was an Inspector under the Food and Drugs Act, duly appointed by the local authority. He produced the certificate of the Public Analyst, dated the 21st of September last whereby it appeared that the sample of brandy marked No. 1 had been adulterated with water, and that the same was 32 degrees under proof, and therefore seven degrees below the minimum strength permitted by the Food and Drugs Act of 1879. Thomas Jones said he was a constable stationed at Llechryd. On the 14th ult. he purchased of defendant 8 wife, who was in charge of the Half Moon Inn, Cardigan, half-a-pint of brandy, for which he paid Is 2d. Having informed her that the purchase was made for analysis, he divided it in the usual way, and sealed it in the presence of defendant's wife, giving her one portion, retaining one himself, and sending the third to the Public Analyst. Fined 20s and costs." Cgn Obs 13 Oct 1894 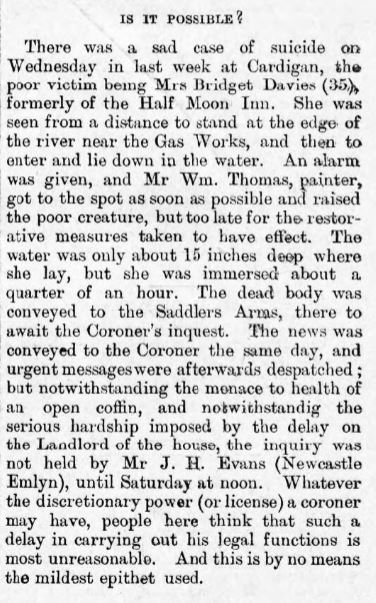