"The Golden Lion was the only house, and the only dwelling house, in the lane. The house was small, with two rooms on the ground floor used for customers, viz., a tap room 12ft. by lift. 3 inches, and back parlour 10ft. 3 inches by ft. 8 inches. There was a back kitchen also on the ground floor, 10ft. 9 inches by 10ft. 2 inches. There were three bedrooms in the house, all on the first floor. There was a stable connected with the house, but the two lettings were different, and there was no connection between the stable and the house. There was room for three horses in the stable. There was no urinal at the house, and the back-yard was very small." WGWWA 6 Feb 1908 - full report att.

Building now demolished. It's the car park at the rear of healthhaus and Bump&Baby (2016)

1909
"According to a Cardigan newspaper, the 29th of September was a fateful date for the late Mrs. Richards, the Golden Lion Inn, in that town. On the 29th September, nine years ago, her husband was drowned at sea. Mrs. Richards was born on the 29th Sep- tember, took to her bed through illness on the 29th September last year, and she was buried on the 29th September this year. Moreover, she entered on the tenancy of the Golden Lion on the 29th September, and closed her tenancy on the 29th September. A most remarkable coincidence of dates" Cymro a'r Celt Llundain 13 Nov 1909
1909
"Mr T J Kendal, solicitor, appeared on behalf of Miss Edith Richards, daughter of the present licensee of the Golden Lion, now in asylum, and formally applied for the transfer to her. The chief constable opposed on the grounds that the applicant was not the proper person to make the application, as only the licensee or person in occupation could do so. Miss Richards, sworn, said she had made arrangements to keep the house, and had paid rent since her mother had been away. The Chief Constable said the next ground of objection was that the house was not required, and he had other objections. The Bench, after a long consultation, granted the applicant a temporary transfer, subject to renewal of the licence by the Quarter Sessions. " County Echo 4 Feb 1909 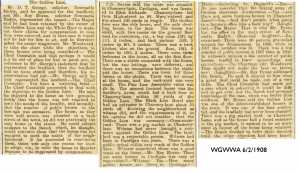