1888
Shown as PH on 25 inch map
"the license of the Clarence Inn, New Court, was transferred to Mrs Letitia Thomas, the present occupier" AO 14 April 1888

1897
"ACTION FOR SLANDER. Mary Williams, Clarence Inn, New Court, claimed £100 damages against Thomas Jones, labourer, of the same place, and Hannah his wife, for having on the 20th April, 1896, said to Margaret Williams, Tanygraigfach, "Gwelais fy ngwr yn ddrwg a Mary Williams, Clarence, ar yr ail o Fawrth." She subsequently repeated the statement to Elizabeth Rees. The defendants put in a defence saying that the statements complained of were true in substance and in fact but did not appear when the case was called nor were they represented. Mr Benson (instructed by Mr Ernest Lloyd), appeared for the plaintiff and said that as the defendants did not appear, it became merely a question of damages for the jury to consider. Mary Williams, the plaintiff, a single woman, who has been assisting her father in the management of the Clarence Inn, New Court, for eight years, said that on the 2nd March there were rejoicings on the coming of age of the landlord of the Red Lion and in April, Hannah Jones, one of the defendants, said that she had acted unchastely with Thomas Jones on the 2nd March. She instructed her solicitors to write to defendants with respect of the statement and failing to get satisfaction issued a writ, to which the defendants replied that it was true. It was not true. The Judge said that before 1891 a woman could not bring an action for slander unless she could prove special damages but now she could do so. The Jury found a verdict for £5, and judgment was given for that amount with costs" CN 22 Jan 1897
1905
Petty Sessions: Lampeter; number on list: 25; name of premises: Clarence Inn; Parish / Place: New Court; Licensee: Williams, Evan; owner or tenant : tenant; registered owner : James Jones, London; free or tied: Free; tied to: [blank]; type of licence: full; on or off licence: on; number of licenced days per week: 6. (1905 list) 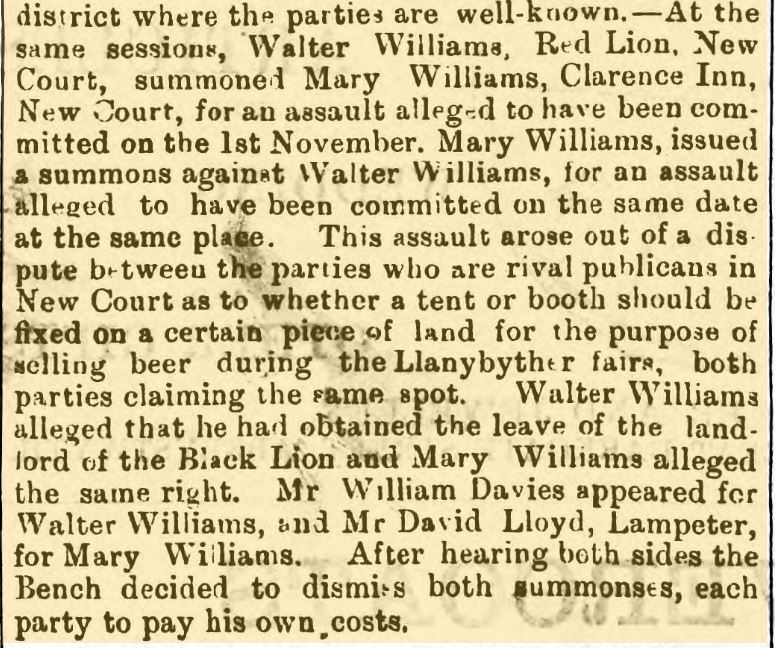