1854
MARRIAGES "6th inst, at Liverpool, Mr. Owens, draper, to Elizabeth, daughter ot Christopher Hall, of the Coach-builder's Arms, Aberystwyth." N Wales Chron 18 Nov 1854
1860
"TO BE LET, On the 12th of May next, ALL that commodious House, called the COACHBUILDER'S ARMS, situate in Moor Street, Aberystwith. Also, the STOCK on the premises to be had at a valuation. For particulars apply to Mr. Christopher Hall." AO 27 Oct 1860

1877
"Mesach Williams, Coachbuilders' Arms, was charged with having two unstamped measures in his possession. Supt. Lloyd said he went into the house and found several measures not stamped. Defendant did not know the measures were deficient" CN 9 Feb 1877 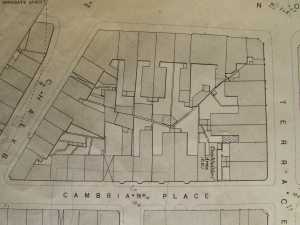