1867
"A transfer of the license of the" Three Tuns" public-house, Trefechan, was transferred to the name of John Richards."AO 16 Feb 1867

1873
Auction, Lot 183 Rent from year to year. Tenant John Richards
Ceredigion Archives MUS/50/16
1873
In AO directory as J Richard, Salt Merchant
1875
Three Tuns, Richards, John, Inn and Public House, Trefechan, Aberystwyth, (Worrall’s Directory, 1875)
1879 Auctioned due to liquidation of estate of John Richards, occupier John Felix AO 24 May 1879 see att (it didn't sell and was advertised afterwards for private sale)
1879
"TRANSFERS. The license of the Crystal Palace,from Thos Abbot to Evan Humphreys Three Tuns, from William George Clarke to Evan Foulkes, New Market Tavern, from Henry Mitchell to William Evans "Nags Head," from David Thomas (deceased) to --- Thomas. " AO 10 May 1879
1892
A charge of supplying intoxicating liquor to Police Constable William H. Davies on the 24th, when on duty without the authority of his superior officer was made against Elizabeth Lewis, Three Tuns Inn, Trefechan was withdrawn by the police.
Aberystwyth Observer 30.6.1892
1905
Not on 1905 list

Auction notice and detailed description of the property 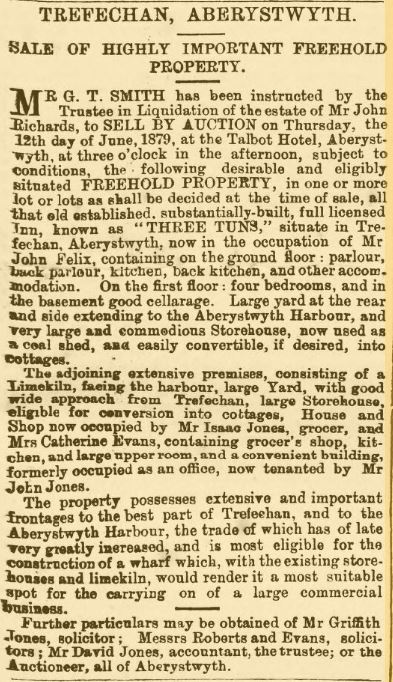