1852
Landlord: James Wilson
"CARDIGAN.—On Tuesday last, a respectably dressed young man, about 23 years of age, rather good looking and well made, and about five feet five in height, having some- thing of the appearance of a mate of a vessel, arrived at the Emlyn Arms, a public house in Cardigan, kept by Mr. James Wilson, and after some conversation agreed to give Mrs. Wilson a sovereign for his board and lodging for two days, or until the following Thursday. He took up his abode there, representing himself to be the mate of a large Brig then at New Quay." Welshman 7 May 1852

1886
"CARDIGAN. STEALING BRANDY. At the borough petty-sessions on Monday a charwoman named Margaret Owen. residing on the Commons near the toll gate, was brought upon remand charged with stealing a quantity of brandy, valued at 5s., on Saturday afternoon, from the Emlyn Arms public-house, the property of William Lloyd. Mr Henry R. Daniel appeared for the defendant, who pleaded guilty. and was fined 2s. 6d. and 12s. 6d. costs, with 2s. 6d. damages." CN 15 Jan 1886

1897
"TOLLS AND DUEs.-The tolls and dues arising from the Market-house and slaughter-house were let by auction on Thursday to Mr John Thomas, Emlyn Arms, the present lessee, for £203, being an advance of £13. The Lower Market was let to the same person, for warehousing purposes, for £9 10s. "
S.Wales Daily News 18 Dec 1897

"At a special Magistrates' meeting on Saturday last, a respectable woman, named Elizabeth Jones, Residing in Napier-street, was charged with steal- ing a leg of mutton from the shop of Mr John Thomas, butcher and inn-keeper, Emlyn Arms, Pendre, the same day.
...
John Thomas, prosecutor, said he remembered Prisoner coming to his shop that morning, about half -past eleven. She had been there once before, half an-hour previous. He went out when she made her second visit, and entered the bar which was a part of the shop partitioned off, and had a window overlooking the shop and watched Accused. The Mayor Was there anybody else in the shop at the time?-Witness Yes, my wife and about six other women. Captain Lewis, coal- merchant, was in the passage, also his son and Nephew as well as Mr Vaughan, clerk at the station. I saw prisoner enter the shop and look at several pieces of meat, and handle them. I saw her handle a shoulder of mutton which was placed the right hand side of the window. When she Put it down she put it more in the middle of the Window. She then looked at several other pieces of meat, afterwards taking the shoulder in her hand and putting it at the left side of the window. Next she looked at some other joints, and again took the shoulder in her hand, replacing it on the Counter near the scale weights. She then went and looked at a piece of beef in the window, after this she once more took up the same shoulder of mutton and placed it in the middle of the counter. Next she looked at a breast of mutton, afterwards again taking the shoulder in her hand and Placing it at the end of the counter near the bar window, where he was watching. had a basket on the bench near the front window, which she now fetched, and placed on the floor near the end of the counter where the shoulder of mutton was, that is the far end of the Counter. She'turned round then with her face to street, and having placed the basket on the floor dropped the shoulder into it. She then asked his wife to change half-a.-crown, but she could not. She then did something to the basket, and I saw she had a plate with a pound of butter on it, Under which she placed the shoulder"
A long and complicated hearing, defendant acquitted. Full report in WGWWA 5 March 1903

1903
"Mixing Mortar. Permission was granted with pleasure to Mr. Morris, Bradford House, who is about building a temperance hotel on the site of the Emlyn Arms, to mix mortar on a piece of land adjoining the Clay pits, which would do away with the nuisance of mixing the same in the street opposite the new building. " CN 4 Sept 1903

"Further Improvements at Pendre. During the past fortnight another landmark of old Cardigan has disappeared, the Emlyn Arms in Pendre having been demolished to make room for the building of large and commodious premises to be used as a temperance restaurant. This will supply a long-felt want in Cardigan, and we heartily wish Mr. Morris every success in his undertaking. This will make tiie sixth house that has been re-built near this part of Pendre during the last few years, and the thrra within twelve months. Were other parts of the town to improve as this has done it would soon present a different appearance." WGWWA 29 Oct 1903

"Further Improvements at Pendre. The new premises being erected on the site of the old Emlyn Arms, Pendre, are proceeding apace, and before the new year comes in they will have been roofed. Mr. Morris, who is building the same, is confident of completing the whole building before next March, when the premises will be opened as an up-to-date Temperance Hotel, fitted up with all the recent improvements. " WGWWA 6 Dec 1903 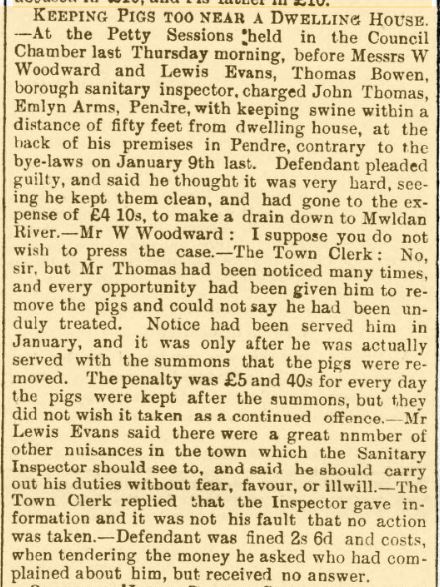 Sold to the chapel 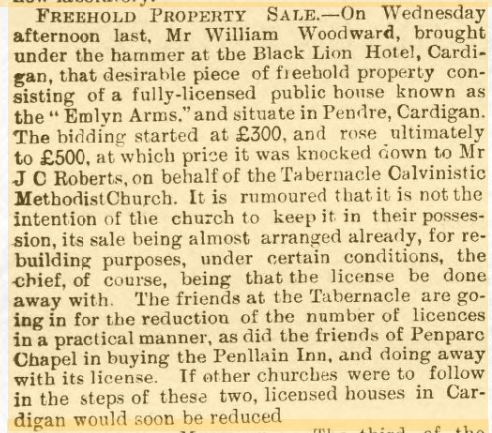 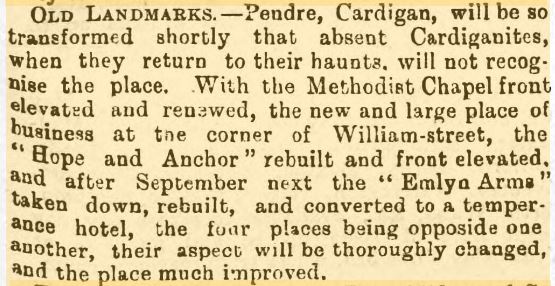 Auction notice for the Emlyn Arms 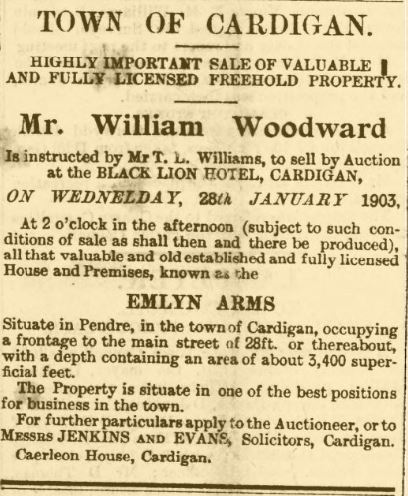