Notes: 1841 Inquest
"SUDDEN DEATH.—On Sunday evening last, Mr. Daniel Mathias, for many years a tide-waiter, in the port of Cardigan, died suddenly. As he was about going to Church, at six, he complained of being ill, and was soon seized with violent fits, and continued so until he died, about nine o'clock. On the following Tuesday, an inquest was held on the body, at the Red Lion Inn, before T. G. Nugent, Esq., (the coroner, J. H. Thomas, Esq., being unable to attend,) when the Jury returned a verdict of Died of fits of epilepsy." " Welshman 9 April 1841

1851
"AN OX.-An accident occurred on Thursday last to a poor woman residing in Llechryd, who was tossed and trampled upon near the entrance to St. Mary-street; Cardigan, by an Ox, which was being driven to the slaughter house. It appears the animal became restive and in spite of the utmost exertions of the men who had the care of it, attacked the poor woman, whose name is Anna Jenkins, and tossed her, but as one of his horns was secured to his leg, he was unable to wreak his full vengeance he however furiously trampled upon her and her clothes were completely torn to pieces. Upon being rescued she was carried to the Red Lion Inn, when Mr. Thomas, the landlord, ill the most humane manner tendered her all the assistance in his power and supplied her with fresh apparel." Welshman 28 March 1851

1884
"CARDIGAN. FlNDING OF THE BODY OF THE MISSING MAN HOLT.— The body of the man Joseph Holt, who suddenly left his home at Pwllhai, Cardigan, on the evening of the 1st of January, and was not afterwards heard of, was found on Friday afternoon in the river Tivy, near the Priory embankment, at Cardigan. An inquest was held on the body, which was partially decomposed, on Saturday evening, at the Red Lion Inn, before Mr J. H. Evans, Newcastle Emlyn, the district coroner, and a jury, of whom Captain Herbert Davies, Triton, was foreman. The necessary evidence having been taken, an open verdict of "Found drowned was returned. Deceased, who was a native of Lancashire, but was well-known at Haverfordwest, where his widow and children now reside, was interred on Sunday afternoon at the Netpool cemetery. Holt was about forty-five years of age. " Cambrian News 8 Feb 1884
1885
Licensee Richard Harries

Inquest at the Red Lion, Cardigan 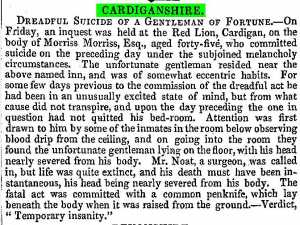