Other names:
Address/Location: (36) Bridge Street
OS Grid Ref: SN5826281461
Opened: c.
Closed: NOT KNOWN       Type: Pub
Summary: Location: 1859 notice refers to it being 'opposite the North and South Wales Bank' in Bridge Street. This bank appears on the Wood Map (see att) as Messrs Williams Davies Benson & Jones Bank (No 18 on map). This seems to correspond to the site now occupied by 36 Bridge Street.

Notes: 1817
Richard Jenkins of the Carpenters Arms to be petty constable Quoted in: CN 4 Aug 1882

c.1847
Obituary of Mrs Claton: "Some fifty years ago she came to Aberystwyth to keep house for her grandfather, the late Dr Evan Griffiths, a man of large practice at one period in his life, who resided at the Carpenter's Arms in Bridge-street." CN 15 Jan 1897
1858, taken over by John Evans. see att. Was it renamed the Castle Inn?

1866 Bankruptcy notice for John Evans
1876
Looks like there could have been another Carpenters Arms. See att licence application from 1876. The 1888 50inch map doesn't show anything on North Road. 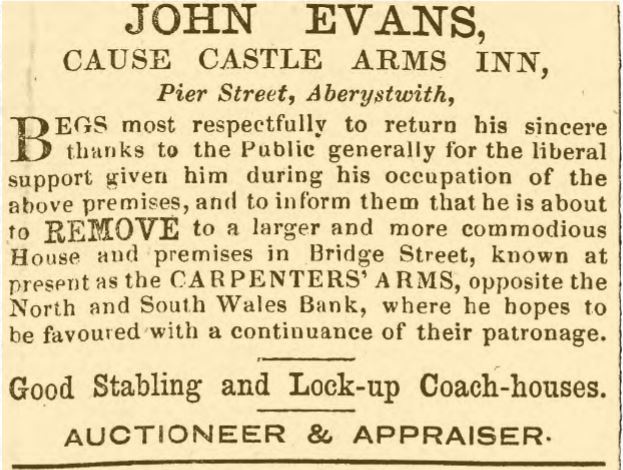 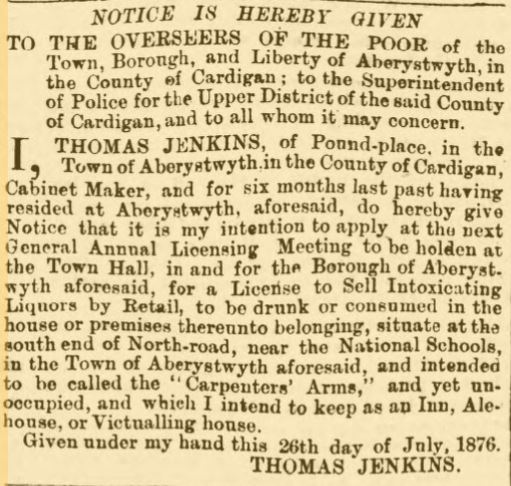