Other names: Nelson; Nelsons Head, Sailors Home, Farmers Arms
Address/Location: Great Darkgate Street, Aberystwyth
OS Grid Ref: SN5818281603
Opened: before 1815
Closed: NOT KNOWN       Type: Pub
Summary: Changes of name seem to occur here. One report refers to the Lord Nelson (late Sailor's Home) and a report from 1904 says that the Lord Nelson is now The Farmers Arms. This is curious as a "Farmers Arms" seems to have been referred to in 1865. But the licence transfer in 1877 is fairly clear. The long gap in references between 1816 and 1872 would allow for it to have changed to the Sailors Home at some stage. In fact, Sailors Home and Lord Nelson seem to be interchangeable names (see 1872) - was Sailors Home a literal description - somewhere for Sailors to lodge? There seems to have been at least one in every port.

An obituary of John Jones (Ivon) AO 22 Sept 1898 suggests that in the 1830s there was a shop of some sort "in upper Great Darkgate Street, where the Sailors Home is now situate"

1869
Theft of a watch from a customer. Mrs Eliza Davies landlady. See att.

1871
licensee: Evan Evans
source: Post Office directory, 1871 (as Sailors Home)
1872
The licence of the Sailors' Home was transferred from Evan Evans to Ann Jones. CN 12 Jan 1872
1872
Licensee Ann Jones accused of allowing gambling. see attachment which refers to the Lord Nelson.Another report of the same trial says "Ann Jones, keeper of the Sailors' Home public-house, was summoned for having infringed the terms of her licence by permitting gambling and drunkenness in her house. Mr J. M. Davies appeared for the defence. Supt. Lloyd said that on Saturday evening, February 10th, he was asked to go to the Sailors' Home because there was a drunken man there with money, who was playing a game of cards with others, which game he (the drunken man) did not understand." CN 16 Feb 1872
1874
Refusing to Quit. Anne Jones, victualler, of the Lord Nelson Inn, Aberystwyth, summoned Thomas Smith, salesman, Mary-street, for being quarrelsome and disorderly at the Lord Nelson Inn, and refusing to quit, on the 21st Aug
Cambrian News 4.9.1874
1875
Lord Nelson, Ann Jones, Inn and Public House, Great Darkgate Street, Aberystwyth, (Worrall’s Directory, 1875)

1876
"THE "LORD NELSON TAVERN, GREAT DARKGATE STEEET. TO BE LET, the above well situated premises is adapted either for a commodious shop or tavern. Possession may be had on the 29th inst. Apply to Miss M. A. Thomas, Angel Inn," Great Darkgate-Street, Aberystwyth" AO 16 Sept 1876

Gambling at the Lord Nelson 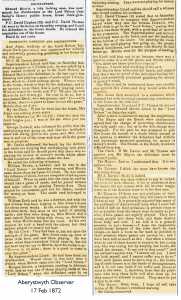 Theft from a customer 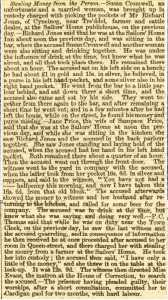 Theft of a watch from a customer 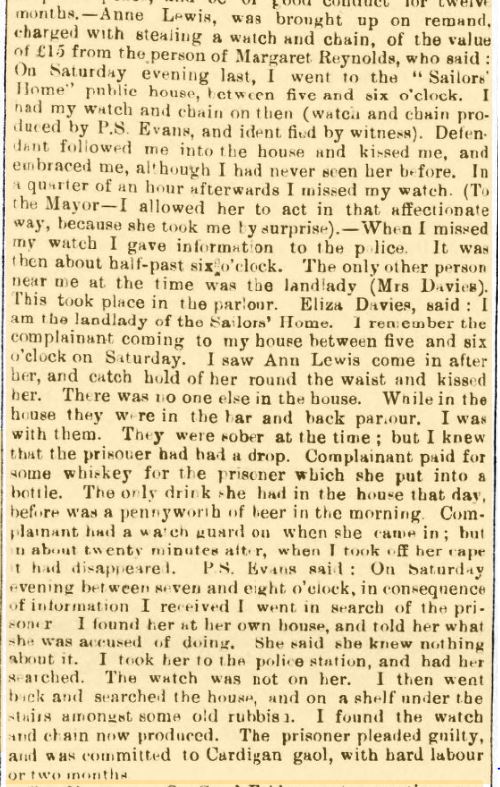