It seems to have been associated with a nearby smithy in the manufacture of chains and anchors. (See obituary 1917)

Notes: 1857
Conditions of sale of properties in Ship builder's Row [South Road], Aberystwyth, in the occupation of ... Hugh Jenkins, smith, of the Chain and Anchor, and of the smithy in Penmaesglas Road... to be sold at the Gogerddan Arms, Aberystwyth, on 18.9.1857, lot 5.
NLW Roberts and Evans, CB6/4.
1868
Licensee: Elizabeth Jenkins
Slater’s Directory, 1868
1871
licensee: Elizabeth Jenkins, Penmaesglas Road.
source: Post Office directory, 1871

1874
"Humphreys v. Erans.-This was also a claim for wages, amounting to £1. 17s The claim was made by Ann Humphreys upon Mr John Evans, landlord of the Chain and Anchor Tavern, of this town, with whom she was a domestic servant. Judgment was given for £1. " AO 19 Dec 1874
1875
Chain and Anchor, John Jenkins, Inn and Public House, Shipbuilders Row, Aberystwyth, (Worrall's Directory, 1875)
1877
Sale of the property by John Jenkins, Inn keeper and blacksmith, to David Roberts, brewer.
NLW Roberts and Evans, CB5/40

1882
Offered for sale "TO be sold, by Private Treaty...Also, the Chain and Anchor, and two private houses adjoining, in Shipbuilders-row, together with a large building hitherto used as a smithy. Particulars of Mr Ellis, Auctioneer The Mart Aberystwyth. " AO 26 Aug 1882

1898
OBITUARY: "DEATH OF AN OLD INHABITANT.-On Thursday morning Mr Richard Jenkins, blacksmith, of this town, passed away at the age of 67. He belonged to one of the oldest families in the town. From time immemorial the craft of a blacksmith had been pursued by members of the family in the village of Chancery. His father came to Aberystwyth and kept a blacksmith's shop in Baker street. His father's brother started in Tanycae when Aberystwyth was a great centre for shipbuilding. They kept a large forge with thirteen fires in the back of the house in Shipbuilder's Row, which was formerly known as the Chain and Anchor. It was called by this name from the nature of the work done at the forge. When the Government demanded that all chains should be tested by means of an expensive testing-machine the industry declined, with the result that the more enterprising members of the family went to the ports of the Bristol Channel, one to Chepstow and the others to Cardiff." (full article continues, with his work in the Greens and Rheidol foundaries in Aberystwyth) AO 29 Dec 1898

1906
Planning committee: "That the plan of new building proposed to be erected by Mr John Owen on the site of the old Chain and Anchor," in South road, be approved of, subject to the same being amended as suggested by your Committee. " AO 9 Dec 1906
1906
John Owen, of the Chain and Anchor, Penmaesglas Road, was granted a new lease on conditions that the roof was raised 2 ft, … the adjoining premises in Penmaesglas Rd, now occupied as a shop, together with 5 ft frontage of the old smithy to be added to these premises as back premises. The work to be complete by 12.5.1907. No work to be carried out between May and October to avoid disturbing visitors. The terms were changed slightly in January, 1907.
Aberystwyth Town Council Minutes, Ceredigion Archives, ABM/SE/1/7, p. 93, 384
1909
Leased by Aberystwyth Corporation
Abstract of deeds with plan, Ceredigion Archives, SMB/A 7

1910
AUCTION: "LOT 5. All that Leasehold Shop, Messuage, Dwelling House and Premises, situate in South Road, formerly known as "Chain and Anchor," now in the occupation of Mr E Jenkins, Dairy- man, at the annual rent of £25, held for an unexpired term of Lease of 71 years from the Aberystwyth Corporation. " AO 10 Feb 1910

Auction notice and detailed description of the property 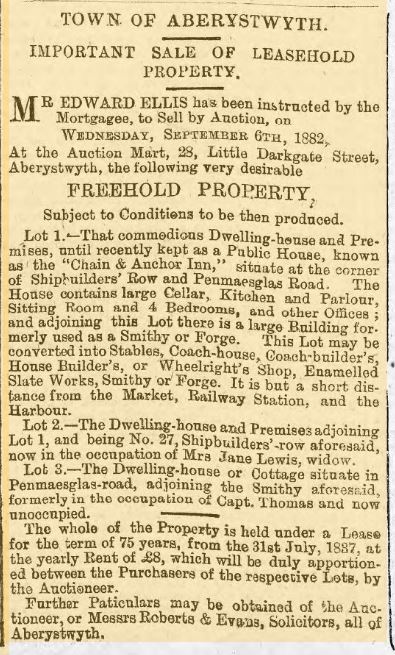 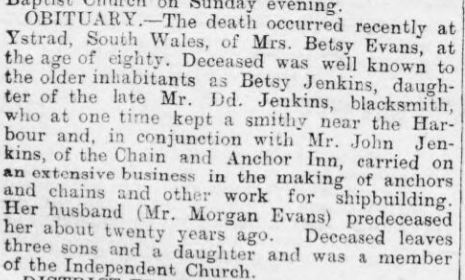