Other names:
Address/Location: Northgate Street
OS Grid Ref: SN5870481826 approx
Opened: before 1850
Closed: NOT KNOWN       Type: Pub
Notes: 1850
Mentioned in a theft case.
"I had some conversation with her, and went in her company to the Crown public house, kept by Mr Hugh Nightingale. I remained there five minutes and called for some porter...
...Hugh Nightingale, Crown Inn, Aberystwith, examined: On the evening of the 19th of August, John Bray came to my house, accompanied by prisoner. I had not known her before. They remained in the house about five minutes, and I had plenty of opportunity of observing her, and remarked a scar upon her left cheek." Welshman 18 Oct 1850

1857
A complicated case involving a horse! Hugh Nightingale was a witness.
"It was about 9 o'clock when he saw him again, at Mr. Nightingale's, near the turnpike, when he was paid. There was then no mention about warranty or soundness. That plaintiff offered him a book with. a black cover after paying the money, asking him to sign it, which he did, without reading it, thinking it was a mere receipt for the money. He was sure it was a book. He never signed the piece of paper produced. Thomas Samuel, farmer, Pendre, deposed, that he had seen the horse shod on the previous day. He was very spirited, and perfectly sound. Hugh Nightingale said, he kept an inn called the Crown. He was present when the horse was sold. There was nothing said about a warranty. After the horse was taken out of the stable, one of the plaintiff's party struck him, and lie made a violent plunge. The book was signed after the horse was taken away. He is certain it was a book." Welshman 6 March 1857

1858
"Thomas Jones, bailiff, of Waunfawr, near Aberystwyth, charged Hugh Nightingale, victualler, Aberystwith, with violently assaulting and abusing him while in the execution of his duty. The case had been brought before the Mayor on the 17th inst., but was adjourned till this day, bail being accepted for the defendant's appearance. Mr. Vaughan, of Lampeter, appeared for the defendant, and Mr. Hugh Hughes, of Aberystwyth, on behalf of the complainant. The assault was fully proved, and defendant was fined £ 3, with casts, or to be imprisoned for one calendar month in Cardigan gaol" N Wales Chron 26 June 1858
1859
Escape from lightning - see att

1866
The licence of the Crown tavern was transferred from the name of the late Hugh Nightingale to that of John Williams, son-in-law of Hugh Nightingale. AO 21 July 1866 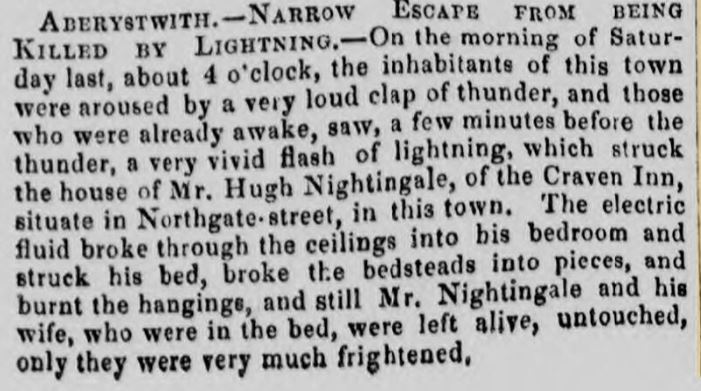