This inn had an old figurehead of Queen Victoria from an unidentified ship as a sign. For a long time, possibly when Queen Victoria died in 1901.
The figurehead was restored to its original bright colours in the 1990s.
When the inn closed in about 1920 it became a private guest house, run by Mr and Mrs Edward Stephens. After their deaths in 1979 it was sold, and later occupied by the Leicester Building Society (photographed in 1986).
Western Mail, 23.6.1979


Notes: 1842
A deed dated 16.1.1842 refers to properties bounded on one side by the Victoria Tavern.
NLW Roberts and Evans, CB6/48
1869
Draft Abstract of title of Mr John Rees of a property called the Victoria Inn and three other properties in Little Darkgate Street and Baker Street. John Rees was described as a cabinet maker / furniture dealer and was declared bankrupt in 1871
NLW Roberts and Evans, CB6/48
1875
Victoria, Jones, Morgan, Inn and Public House, Baker Street, Aberystwyth, (Worrall’s Directory, 1875)

1919
The police objected to the licences of the Freemasons Tavern Bridge street and South road (George Jenkins, occupier); Three Horse Shoe, Gray's Inn-road (Mr. David Davies); Victoria Hotel, Baker Street (Mr. T W Rees); and the Lisburn Arms Northgate street, (Ellen Bennison). The police submitted that the houses could be done away with, and that their trade was very small. There were already too many public houses in the town. The population of the town was 8,794, being 199 persons for each public house of which there were forty-four. The houses were referred to the Compensation Authority, and were provisionally renewed.
The Cambrian News and Merionethshire Standard, 7th March 1919
1919
Listed for closure by the local licencing committee, Valued for compensation at £411. Licence temporary renewed because of lack of compensation funds, but paid (and the pub closed) within a short time.
(County Licencing Committee, 1905-1938 Ceredigion Archives, Cards/QS/L/1) 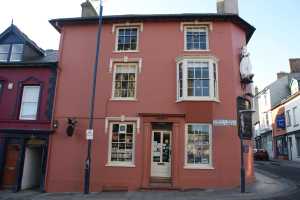 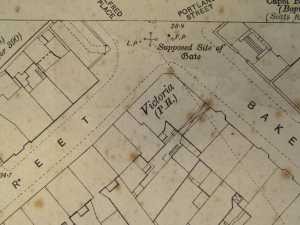 Figurehead outside the Victoria