Other names:
Address/Location: Ponterwyd
OS Grid Ref: SN7742381676
Opened: c.
Closed: c. 2010       Type: Pub
Summary: This is one of the inns built on the road between Rhayader and Aberystwyth to reduce the distance between one posting station and another.

Notes: 1839
[Description of a ruined building which had been intended as an inn]. 'This is near another lonely place – [where there is] an inn too – that has perhaps been the ruin of the other; for it is built where the road turns off to the Devil’s Bridge … The Inn is Dyffryn Castle.' [The ruined inn was probably the original Nanteos Arms.]
Anon, An Excursion over the Mountains to Aberystwith, Blackwood’s Magazine, 46, July 1839, p. 68
1840
Dyffryn Castle Inn. Newly built, to be let from Lady Day next. 14 miles from Aberystwyth, 20 from Rhayader. Now owned by Mr and Mrs Taylor.
1840
DYFFRYN CASTELL INN.
We perceive by the advertisement [above] that this newly built and commodious Inn and Posting House, with the Farms occupied therewith, are to be let from Lady-day next, and we doubt not that a desirable Tenant will very speedily be found; as independently of the superior advantages which this Inn possesses as a Posting House by its connexion with all the principal lines, the eligible Farms combine to render it worthy the attention of a good practical Agriculturist. We believe Mr. and Mrs. Taylor resign Dyffryn Castell on the sole ground of altogether retiring from business.
The Demetian Mirror, 3rd October 1840
NLW Nanteos Rentals, R71; Demetian Mirror, 3.10.1840, pp. 63 - 64
1871
In the 1871 Census, the publican was Thomas Jenkins. He was there from around 1860. His son, William, ran the nearby Rhydlydan Inn.
1882
Seven day's licence granted to Richard Harvey
Llanbadarn Fawr Petty Sessions, The Cambrian News and Merionethshire Standard, 1st September 1882.

1896
Mrs. Harvey, of the Dyftryn Castell Hotel, applied for a transfer of the licence of the Maesbangor Arms from Mr. Abraham Owen to herself; CN 1 Jan 1896 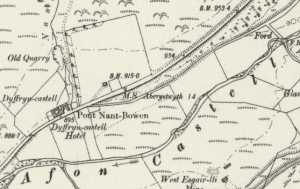 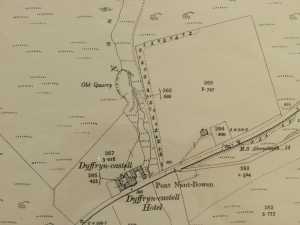 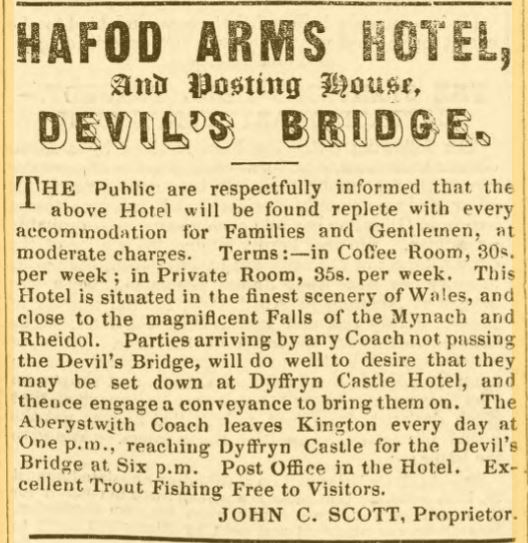 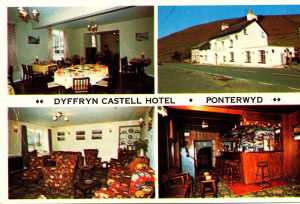