Other names: Royal Oak
Address/Location: High Street SA48 7BB
OS Grid Ref: SN5767548120
Opened: before 1800
Closed: open 2018       Type: Hotel
Summary: The original Royal Oak occupied the part to the right hand side of the archway as we face the building. It later took over The Globe and then The George (see separate entries)
2016 - on the market.
2017 - open as a restaurant.
2018 - taken over by Colin Rose, open as a pub, and being renovated as "The Royal Oak Hotel", including a pub, a restaurant called "The Stables" and 7 hotel rooms.

The Courtyard behind was converted into Mews.

1865
Lampeter Agricultural Club, Ploughing competition: "After the successful competitors had been paid, several of the gentlemen and farmers retired to the Royal Oak, Lampeter, where a substantial dinner was provided by Mrs. Evans, and which was presided over by W. Jones. Esq., Llwynygroes, the chairman of the society. After the cloth had been removed, most appropriate speeches were delivered on the benefit of ploughing matches and improvements in agriculture." Aber Obs 18 Feb 1865
1870
"LAMPETER. INQUEST. On the 10th inst. an inquest was held at the Royal Oak, Lampeter, before Thos. J. Hughes, Esq., coroner, on view of the body of Enoch Thomas, aged 64, who resided at Typoeth, in the parish of Lampeter. From the evidence adduced, it appeared that the deceased was seen in a state of intoxication on the road near Lampeter, about ten p.m. of the 7th, and partly assisted through the gate, when he went alone towards home. On the following day, about three o'clock in the afternoon, the body of a man was seen in the River Dulas, near a new bridge by the gas works, and on being pulled out proved to be that of the deceased, who had not been at home during the night. Verdict-" Found drowned."" Aber Times 15 Jan 1870
1871 census
John Jones, Publican
1875
licensee: John Jones (Worrall’s Directory, 1875)
1881 census
John Jones, Hotel Proprietor
1891 census
Margaret Jones ( widow of John Jones) Innkeeper, Publican

1894
"Application for the transfer of the licence of the Royal Oak Hotel, Lampeter, from Mrs Jones, deceased, to Miss Jones was granted." CN 6 July 1894

"LAMPETER COUNCILLOR'S DEATH: Mr. David Price Davies, veterinary surgeon, of the Royal Oak Hotel, Lampeter, died on Wednesday evening after only four days' illness. On the 8th inst. he was elected on the town council (unopposed) to fill a casual vacancy. Deceased was highly respected by all, and he leaves a widow to mourn his loss. " Evening Express 26 Jan 1905

Late Licence until 6am 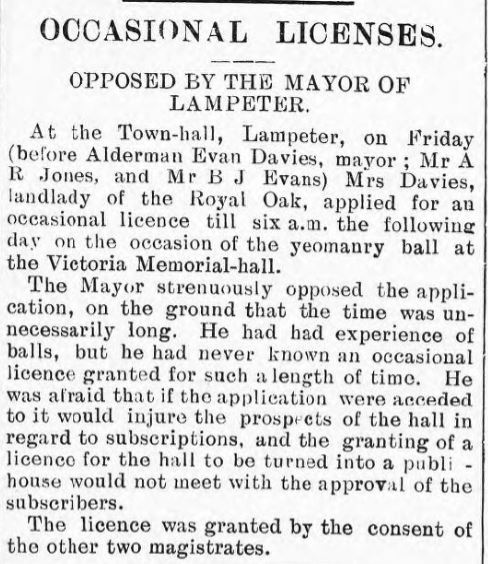 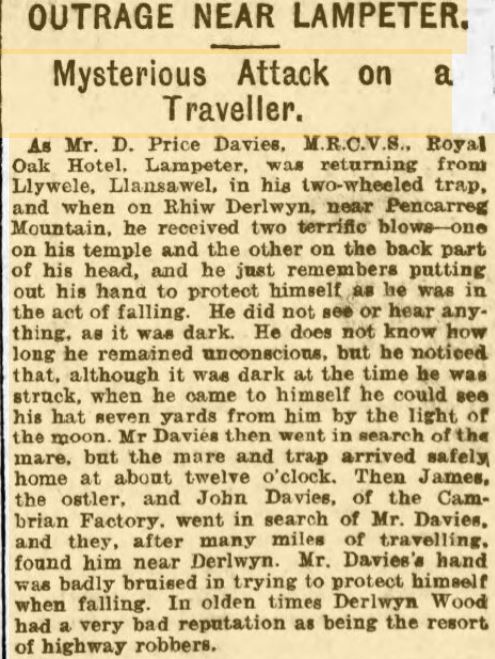