Other names:
Address/Location: near Llangeitho
OS Grid Ref: SN6409059017
Opened: c.
Closed: after 1964       Type: Pub
Summary: On the B4342 and B4578 crossroads.
Thought to be a drover's pub.
(Richard Moore-Colyer, The Welsh Cattle Drovers, (2002), p. 139)
At sometime during the Victorian period, a local servant murdered his mistress for her fortune, but finding only a guinea or two he came to the Stag's Head, got drunk and was arrested for murder.
The Stags head is mentioned in Bethan Phillips book 'Pity the Swagman, The Australian Odyssey of a Victorian Diarist (2002) 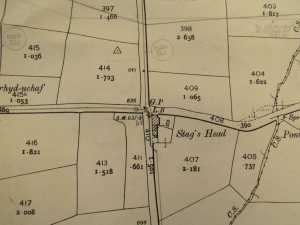 Englyn in praise of the Stag's Head