1865
"Jones v. Jones. David Jones of the Beehive public house, Aberystwith, sought to recover from the defendant, Mary Jones, of Penygaer, Llangwyryffon, the sum of Â£ 1 12s, being money due upon the I.O.U. given by her late husband Evan Jones, of North Parade, in this town, tailor. Mr Hugh Hughes appeared for the defendant, who wanted to know from plaintiff, what money he claimed, as she was of opinion the money due to plaintiff upon a certain note of hand had been paid by her late husband. The plaintiff said that the late Evan Jones had paid up the note of hand which he held with the exception of 11 12s; and for that balance the I.O.U. was given. Mr D. Lloyd, at the County Court Office was a witness to the I.O.U. Judgment for plaintiff, the amount to be paid in two months." Welshman 22 Sept 1865
1871
Open
(1871 census)
1876
Application by David Jones for Licence, premises currently occupied by Anne Roberts widow. see att

1884
Obituary of David Jones (1889) said that he was former landlord of the Beehive, and had given up work about 5 years earlier. In 1888 was at 1 Beehive Terrace, running a lodging house with his wife. Presumably this was the former pub? 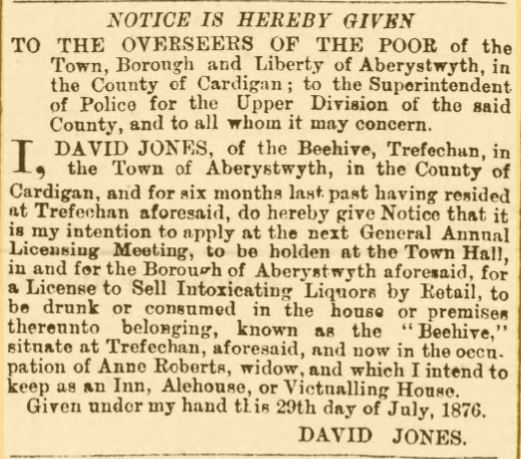 The battle of the wooden legs