Other names:
Address/Location:
OS Grid Ref: SN6217192975
Opened: c.
Closed: NOT KNOWN       Type: Pub
Summary: A site formerly associated in historic sales particulars with the Gogerddan Arms. It is in an area known as Moel Ynys and was not far from the place where a ferry plied between Ynyslas and Aberdovey, so might have provided shelter and refreshments to those waiting for the ferry on this notoriously dangerous crossing.

May also have been used by the lime-burners at Ynyslas

1875/1876
Reports of Rural Sanitary Inspector. (see attachments). Owner Mr Jenkin Jones, Glangors, Clarach.
AO 3 June 1876 "YNYSLAS The report also stated that nothing had been done to the houses at Ynyslas for the purpose of putting them into habitable repair, save flooring the Gogerddan Arms. The Inspector said several of the tenements were unoccupied."
1881 Thomas Griffiths mentioned as tenant (see att)
1881 Census Thomas Griffiths, Mar, 40, Joiner
1883 Auction AO 16 June 1883
"Lots 29 and 30, being the Gogerddan Arms, on the main road leading from Ynyslas railway station to Tre'rddol, and an allotment in the parish of Llancynfelin, were not sold."
1887
Sale by Auction
Lot 2 is a Cottage, Land and Premises, known as GOGERDDAN ARMS, situate within 300 yards of Ynyslas Railway Station. It is a splendid dwelling house comprising front kitchen, back ditto., parlour, dairy scullery, w.c., and five bedrooms. The out-buildings comprise large cowhouses. There is also about an acre of splendid Meadow Land attached.
The lot is held under a lease for a term of years granted by Sir Pryse Pryse, Bart., of which 78 years are unexpired, at an annual ground rent of £1 10s.
For Particulars apply to the Auctioneer, or to Mr R Jones, BIack Lion, Bow-street.
AO 5.2.1887
1895 CN 12 July 1895
"Lot 25 was the Gogerddan Arms, near Ynyslas, held on lease by Mr Jenkin Jones for 99 years from 1866 at the ground rent of 30s.; also 14 acres. of good pasture land in the occupation of Mr Thomas Griffiths at £4. Withdrawn at £140. " 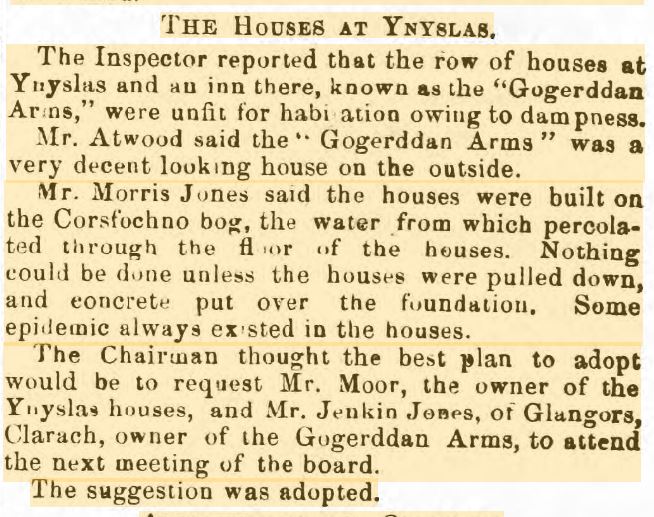