Other names:
Address/Location:
OS Grid Ref: SN5858062964
Opened: c.
Closed: NOT KNOWN       Type: Pub
Notes: 1876
"Evan Jones, Plough and Harrow, was summoned by Mr Supt. Lloyd for being drunk and disorderly on his own licensed premises on October 9. Defendant said with emphasis that he was as sober then as he was at the moment he was in court. P.C. W. Joseph said that on the 9th October he visited the Plough and Harrow at 10 30,where he found the landlord drunk, and very abusive. He ordered the officer and P.C. Davies out of the house, saying they were not wanted at that time of night. Fined 2s 6d, and costs. Defendant was also charged with permitting drunkenness on the same date. Defendant admitted this offence, saying he could not help it. A fine of 2s 6d, and costs, was inflicted. The defendant was further charged with keeping open his house after closing hours on the 9th October. Defendant said the house was not open until the police came. P.C. Evan Davies proved the case, and defendant was fined 15s, and costs" CN 3 Nov 1876

1882
"Breach of the Licensing laws. William Evans, mason, Plough and Harrow. Nantcwnlle, was charged by Mr Superintendent Lloyd with having sold beer without a licence on the 24th March. Mr C. Millard, Lampeter, appeared for defendant and said that the holder of the licence had died and the son-in-law had continued to sell. Under the circumstances the Bench imposed a fine of 5s. only. " CN 2 June 1882 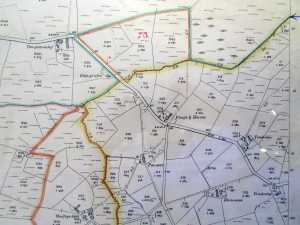