This sold alcohol wholesale and in bottles but was marked as a public house on a map in about 1900. Its earliest record dates to 1840 when William Watkins lived there as a beer retailer. By 1851, Jones and Watkins were selling imported wines and spirits. John Watkins continued to sell wine and spirits wholesale there until 1900 when Theodore Fear leased it from the owners, David Roberts, the brewers of Trefechan, who owned many pubs in Aberystwyth. Theodore Fear retired early and died young, and the stores were Taken over by Emil H Harding by 1909. It appears that he continued to manage the business until the building was demolished to make way for Burton’s new shop which was opened in 1938.

1900
NEW SHOPS AND NEW BUSINESSES AT ABERYSTWYTH
Along Terrace road we find more improvements, the first to catch the eye being that of Mr T Ellis, draper. These premises have been largely extended and improved and a commodious showroom added to the establishment. The front sign in a bold white enamel is a striking feature amongst the other shops.
Montgomery County Times, 2.6.1900

1900
WINES AND SPIRIT
Mr Theodore Fear, who has taken Messrs Watkins's wine and spirit business, announces in another column that in future the business will be carried on by him. Wines and spirits of the best qualities will be sold, the whole of the bonded stores having been purchased by him from Messrs Watkins.
CN 27.7.1900

1909
At the weekly Petty Sessions on Wednesday, before J. D. Perrott, Edward Evans, and W. J. Watkins, Esqrs., the licence of the Wine Vaults, Terrace-road, was transferred from Mr Theodore Fear to Mr Harding of Manchester.
CN 8.10.1909 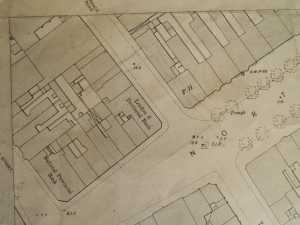 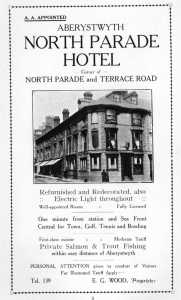