Other names:
Address/Location: Princess Street / Cambrian Terrace
OS Grid Ref: SN6083090110
Opened: 1865
Closed: NOT KNOWN       Type: Pub
Summary: This was one of three big hotels built by Thomas Savin in 1864-1865, soon after the railway arrived (the others were the Castle Hotel, Aberystwyth and an hotel at Aberdovey). It was taken over in 1876 by Uppingham School for over a year, during a typhoid epidemic in Uppingham.

During the Second World War it was occupied by evacuated students.

In 1946 the hotel moved to the opposite corner of Station Yard and the old building was purchased for £16,000 by D.J.James and re-named Pantyfedwen (the name of his home at Pontrhydfendigaid) and opened in July 1947 as a conference centre by the Welsh League of Youth. It was later taken over by the University as a hall of Residence and demolished 1979.

It is said that the hotel had more spirits for sale during the Second World War than any other village in Ceredigion because a travelling salesman who sold them was gambling in the hotel just before the outbreak of war, and he lost, so gave the hotel his stock of spirit samples. During the war, hotels were allowed to have a stock of spirits based on what they sold in August 1939.

"BORTH, CONSIDERABLE alarm was felt a few days ago on discovering that one of the rooms at the Cambrian Hotel, which has just been built by Mr. Savin, was on fire. Happily the fire was extinguished in a few minutes, before much damage was done." AO 13 Aug 1864
1868
Licensee: Franks, Miss
Slater’s Directory, 1868

1873
"BORTH. CONCERT. On Thursday evening a very successful event, in aid of the Borth Church Building Fund, was given by the Borth Church choir, assisted by the Rev J. Edwards, and Miss Edwards, Rhosymedre, Rev E. Edwards, Kerry, Rev D. E. Evans,Llanwrin, and other friends, at the Concert Room of the Cambrian Hotel, Borth. Pressure on our space prevents our giving the programme in full... " AO 22 Feb 1873

1874
"BORTH. THE NEW CHURCH Further arrangements have been made in connection with the ceremony of Wednesday next. The memorial stone of the sacred edifice will be laid by Lady Pryse, of Gogerddan, at half-past two o'clock, when the Right Rev Dr Basil Jones, the Lord Bishop of St. David's, will officiate. The ceremony will be proceeded by a luncheon at the Cambrian Hotel, and divine service will be held in Welsh at the schoolroom in the evening. " AO 14 Nov 1874

1887
"The Cambrian Hotel is a large and handsome edifice close upon the beach, facing Cardigan Bay. It is appointed with the usual auxiliary comforts for tourists and travellers. There is a Lawn Tennis ground, and provision for out-door amusements of all kinds. It is very near the railway station. " Visitors List and Guide for Aberystwyth etc 24 Aug 1887

1888
"Mr Walter William Lewis, Cambrian Hotel. Borth, made an application for the transfer of the license of the hotel from Mr George Lewis, deceased, to himself.—Granted. " May 1888

"BORTH. A sale of furniture took place at the Cambrian Hotel, Borth, this week, by order of Justice Sterling. Good prices were realised, and the bidding was brisk. Amongst the furniture sold were the contents of the hydropathic bath rooms. " AO 27 Oct 1888

1899
"FAST ON THE ROCKS. ADVENTURE OF AN ABERYSTWYTH YACHTING PARTY. An unpleasant experience attended a party of ladies and gentlemen yachting from Aberystwith to Aberdovey on Tuesday night. When outside Borth the yacht got fast on the rocks. The night was dark, a heavy swell was on, and the party feared being wrecked every moment. Desperate efforts were made to attract the attention of people on the shore by lighted matches, &c., and ultimately the signals were observed, and with difficulty the ladies were landed by volunteers at Borth, and lodged at the Cambrian Hotel for the night. The party included the Marquis de Polatto. " Evening Express 6 Sept 1899

1903
Plans to convert to a French convent school - see att.

1909
Site of auction of 'Moreland House'

1914
"The licence of the Cambrian Hotel, Borth was transferred to Mr. S. McCausland. formerly in a similar business in Belfast. " CN 10 April 1914

"BORTH. PRISONER OF WAR. News has been received that Pte. Fred McCausland has been taken prisoner by the Germans" CN 24 Nov 1916

"SAND YACHT. Mr. Laurence, a visitor who stays at the Cambrian Hotel, has introduced a sand yacht, made and brought down by himself. Great interest was taken in it by visitors. The weather being favourable, it sailed from near the Hotel to Moelyrynys and back, about five miles, in twenty-three minutes. " CN 15 Sept 1916

1917
"Mr. and Mrs. McCausland, Cambrian Hotel, have received information that their son has escaped from a German detention camp. He was taken prisoner in action and although he afterward escaped more than once he was recaptured. He is now in Holland and is expected home shortly" CN 31 Aug 1917

1918
"WEALTHY WOMAN'S JOKE. At the Cardiganshire Quarter Sessions at Lampeter on Friday Miss Agnes Crompton, of Borth, a lady of independent means, was charged with stealing an easy chair and a table from the platform of the Borth Railway Station on July 11, the property of Mr. Frank Williams, of Forden, near Welshpool. Mr. W. P. Owen, Aberystwyth, appeared for the prosecution, and Mr. Harold Lloyd, Cardiff (instructed by Messrs. Hughes and Hughes, Aberystwyth), for defendant, who pleaded not guilty. According to the prosecution, two lorries full of furniture had been taken to Borth Station overnight, having been bought by Mr. Williams at a sale of Mr. and Mrs McCausland, of the Cambrian Hotel, Borth. The police found the missing articles in defendant's house. Defendant said that Mrs. McCausland and herself were very friendly, and played jokes on each other. She admitted taking the articles from the platform, but it was a silly joke. Accused's brother-in-law said she had inherited about £ 6,000, and also had a life interest of £180 a year. The jury found accused guilty, and she was bound over in the sum of £25 for twelve months. " Cmn Jnl 29 Oct 1918

Application for a cinema licence granted 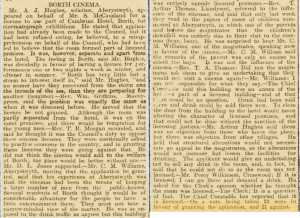 Advert for the Cambrian Hotel, 1900 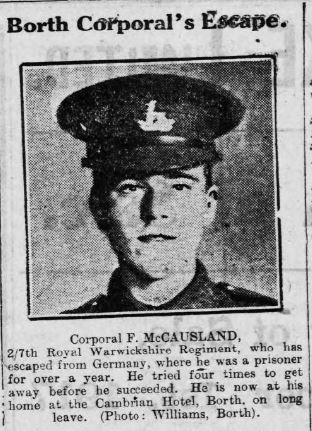 Advert for the Cambrian Hotel 1896 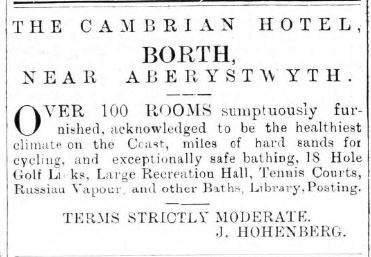 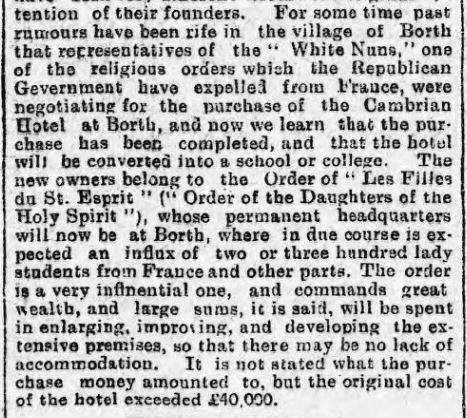 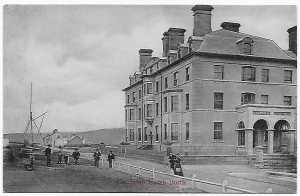