Other names:
Address/Location:
OS Grid Ref: SN7358476939
Opened: c.
Closed: 1873       Type: Pub
Summary: William 4th was King from 1830-1837; it is possible that this pub was opened or re-named during his reign but might be the inn 'about to be built near this' [the Devil's Bridge Inn] in 1824. (Prichard, Thomas Jeffery Llewelyn, The New Aberystwyth Guide to the waters, bathing houses, public walks, and amusements : ... (1824), pp. 47-48). It is mentioned in very few documents and by none of the tourists who must have passed it on their way to or from the Waterfalls and the larger inn at Devil's Bridge [later the Hafod Arms Hotel]. J.B. Balcombe bought The King William 4th pub in 1873. He already owned owned the Devil's Bridge Hotel and the Queen's Hotel, Aberystwyth. It appears that he became bankrupt in 1876 when he sold the Hafod Arms Hotel to Waddingham who owned the rest of the Hafod Estate.
It is likely to be the property named 'Rheidol House' on the late 19th, early 20th century maps, or one of the buildings attached to it.

1876
Abstract of the title of Rev. John Ormond to hereditaments [Smelting etc.] in the p. of Llanbadarn Fawr. Includes linen map showing the factory, cottages, quarry and the public house [The King William 4th Devil’s Bridge].
Original documents dated 1874. Abstract made 1876.
Refers to a deed dated 17.5.1839 of Powells of Nanteos et al who owned it.
The property was put up for sale on 15.7.1873 Lots 10 and 11
J.B. Balcombe was the highest bidder £1,100
Ceredigion Archives H/E2/7
24 March 1877
Conveyance of land and hereditaments [Smelting fields, the wool factory, The King William the 4th public house] in the parish of Llanbadarn Fawr. The Rev. John Ormond to John Waddingham Esq.
Ceredigion Archives H/E2/9

Advert for the King William the Fourth 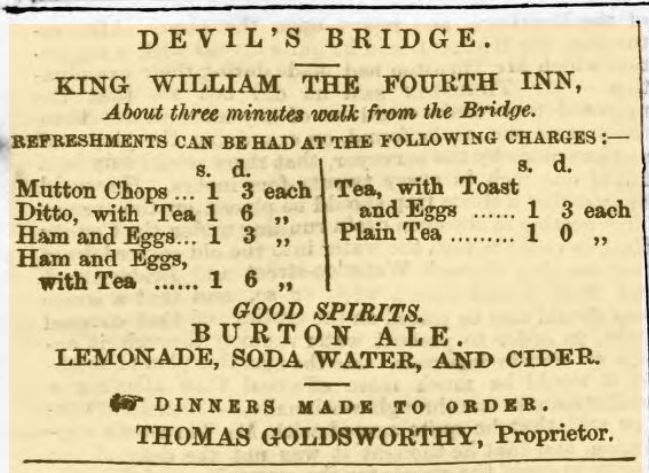