Notes: These premises do not appear before the 1911 census, which leads us to believe that it was built in the early 1900’s.
However, in 1901, Sarah Walters, a widow aged 33 lives at 13 Station Terrace, running a Temperance House. An advert from 1899 shows her running a Temperance Hotel in Station Terrace.
In the 1891 Census, Sarah Anne is the wife of Walter Walters, aged 40, a locomotive Railway Engine Driver, living in Bedminster, Bristol. He was born in Llanycrwys, Carms.
1901
13 Station Tce Sarah Walters Keeper of Temperance
1902 probably moved to College St. Advert refers to it being 5 mins from station, whereas station terr. advert said 2 mins.
1902
Mention in inquest report in CN 9 May 1902. Clergyman was being nursed there following fall from horse. Died. Inquest held in Walters Temperance Hotel.
1906
Mrs Walters willing to take in a Tom Jones from the Workhouse. WGWWA 25 JAN 1906
1908
A group of clergy are entertained there. CJ 21/2/1908
1910
Mrs Walters, Commercial Hotel
1911
Walters Hotel Sarah Walters Temperance Hotel Keeper
1922
Sarah Walters dies between June and September
Mr & Mrs Jayne run the Walters Hotel
1941
David Francis Jayne dies
1945
Their son Basil died of wounds in Holland
1960
Mrs Ann Jayne dies, aged 73
Walters Hotel was subsequently bought by St David’s College, and became Burgess Hall. 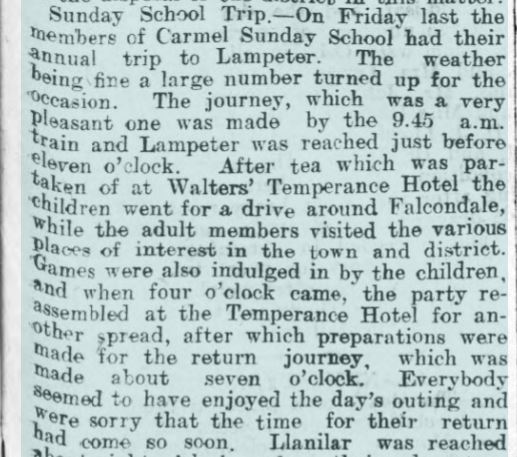 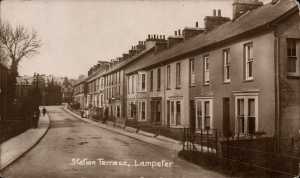