1884
"CARDIGAN. FORMATION OF A FARMERS' CLUB.—At a special meeting of the gentry, farmers, and others, held in the Guildhall, Cardigan, on Saturday, it was decided to organise a Farmers' Club for the district, to consist both of landlords and tenants. About 60 persons subscribed their names as members, and the large room of the Victoria Coffee Tavern, in Priory-street, was resolved upon as a meeting place, to be at once fitted up for that purpose. The following officers were appointed :—Chairman, Captain Jones-Parry, Tyllwyd; vice-chairman, Mr. C. E. D. Morgan-Richardson, Noyaddwilym secretary, Mr. W. Woodward, Caerleon House. The meeting, which was of an influential character. was very unanimous on all subjects of deliberation. " Weekly Mail 23 Aug 1884

1905
"One other case is now given to show how erratic the properties are assessed. The Victoria Coffee Tavern for one room is assessed at £12, one room on next floor at £7. and one room in attic at £6, a total of £25, the same as Pendre house, not reckoning -the back premises. This one narrow house in Priory-street, with one room on each of the three floors is assessed at the same figures as one of the finest places in town, in one of the most coveted positions" WGWWA 11 May 1905

1908
" Death of Miss Carpenter.—The death took place suddenly on Monday, of Miss Sophia Carpenter of the Victoria Coffee Tavern, Priory-street. Miss Carpenter, who had showed no outward signs of ill-health, was the victim of a severe paralitic seizure, from the effects of which she passed away in about nine hours, during which time she did not regain consciousness. She was about 65 years of age and for several years had been manageress of the Victoria Coffee Tavern, and formerly for her brother, Mr. Jehu Carpenter, of High-street, who died in 1899 There are still a sister and a. brother living" WGWWA 5 Dec 1908 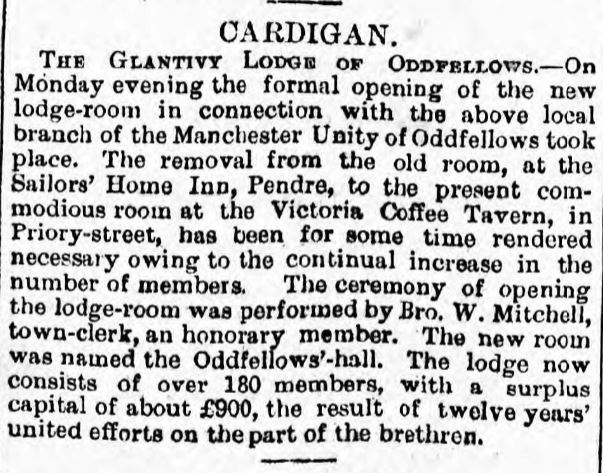