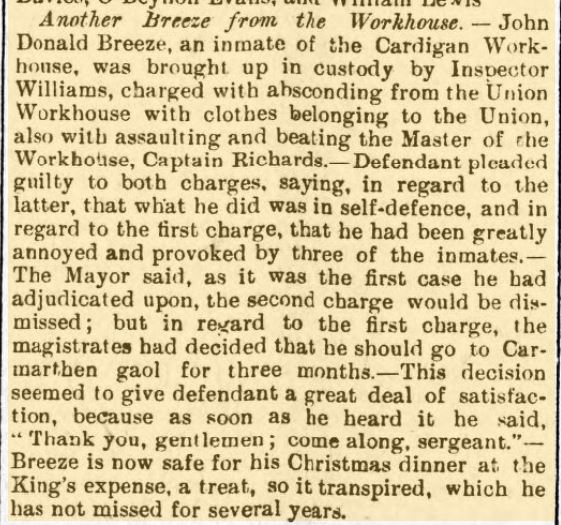 Transcript:
Another Breeze from the Workhouse. John Donald Breeze, an inmate of the Cardigan Workhouse, was brought up in custody by Inspector Williams, charged with absconding from the Union Workhouse with clothes belonging to the Union, also with assaulting and beating the Master of the Workhouse, Captain Richards. Defendant pleaded guilty to both charges, saying, in regard to the latter, that what he did was in self-defence, and in regard to the first charge, that he had been greatly annoyed and provoked by three of the inmates. The Mayor said, as it was the first case he had adjudicated upon, the second charge would be dismissed; but in regard to the first charge, the magistrates had decided that he should go to Carmarthen gaol for three months.This decision seemed to give defendant a great deal of satisfaction, because as soon as he beard it he said, Thank you, gentlemen come along, sergeant." Breeze is now safe for his Christmas dinner at the King's expense, a treat, so it transpired, which he has not missed for several years.
Notes:
Linked to
Breeze, John Donald [1843-1907]