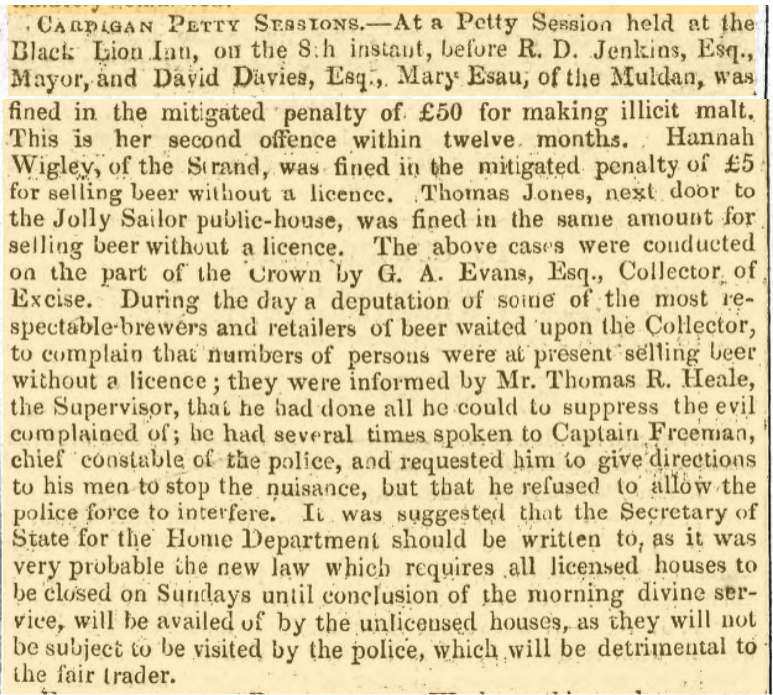 Transcript:
Mary Esau, of the Muldan, was fined in the mitigated penalty of £50 for making illicit malt. This is her second offence within twelve months. Hannah Wigley,of the Strand, was fined in the mitigated penalty of £5 for selling beer without a licence. Thomas Jones, next door to the Jolly Sailor public-house, was fined in the same amount for selling beer without a licence. The above cases were conducted on the part of the Crown by G. A Evans, Esq., Collector of Excise. During the day a deputation of some of the most respectable brewers and retailers of beer waited upon the Collector, to complain that numbers of persons were at present selling beer without a licence; they were informed by Mr. Thomas R. Heale, the Supervisor, that he had done all he could to suppress the evil complained of; he had several times spoken to Captain Freeman, chief constable of the police, and requested him to give directions to his men to stop the nuisance, but that he refused to allow the police force to interfere. It was suggested that the Secretary of Slate for the Home Department should be written to, as it was very probable the new law which requires all licensed houses to be closed on Sundays until conclusion of the morning divine service, will be availed of by the unlicensed houses, as they will not be subject to be visited by the police, which will be detrimental to the fair trader.
Notes:
Linked to
Cardigan/Aberteifi
Hannah Wigley , Strand, Cardigan
Mary Esau , Greenfield Square/Mwldan, Cardigan