Born: Not known       Died: Not known       Active from: 1900?       Active to: 1920s?
Notes:The 'Daughters of the South' Temperance Union (South Wales Women's Temperance Union). Various branches, mainly in South Cardiganshire, including Cardigan, Lampeter, Tregaron and Newcastle Emlyn. Seems to have also had a 'byddin y plant' (children's army) as a sideline. The Taliesin report (1901) suggests that they had male members as well.

"A well-attended meeting of the local branch of the South Wales Women's Temperance Union was held at the Temperance Hall on Sunday evening, under the vice-presidency of Mrs Williams, Bryngogarth. Mrs. Williams de- livered a spirited address on the Licensing question, condemning the Bill in a convincing manner. Mrs. Griffiths, Chidlaw House, read a copy of a petition drawn up by Cranogwen against the bill and this was adopted by the meeting and signed by between seventy and eighty of the members of the branch" WGWWA 9 June 1904

"Temperance. A meeting of the women's branch of the U.D.M.D. was held at the Vestry under the presidency of Mrs E. C. Evans, Chapel-street, on Wednesday evening of last week. The attendance showed an improvement as compared with the previous ones held during the present session. Several new members were enrolled." CN 5 March 1909 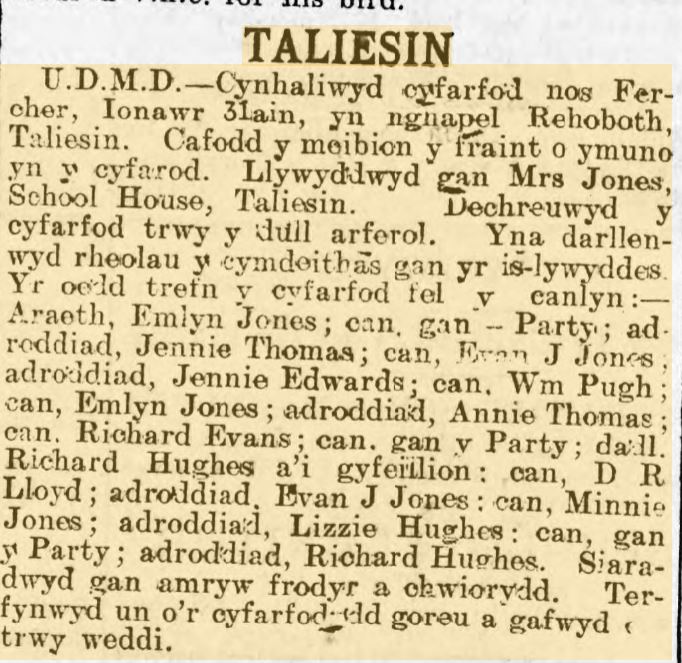