1876
County court case: "Daniel James, farmer, Tynpompren. said he arranged to meet plaintiff and David Jones at Swyddfynnon. It had been arranged that David Jones should be there to sign the note. John Jones, senr., asked him to sign the note. but he refused at first. They went to the Fountain, and stopped so long there, and be had so much of what they did call drink till he did not know what he had signed." Judgment for plaintiff for full amount claimed" CN 16 June 1876

1879
Transfer of Licence.-The licence of the Fountain Inn, Swyddffynnon, was transferred from Wm. Williams to John Thomas CN 9 May 1879

1904
"On Saturday. 12th November, the remains of David Carne were interred at the Churchyard at Ystrad Meurig. The deceased was the son of the late Mrs Charlotte Carne, Fountain Inn, Swyddffynnon, and had just attained his 26th birthday. Since his mother's sad death last year he had been in very bad health and suffered from epileptic fits." CN 18 Nov 1904 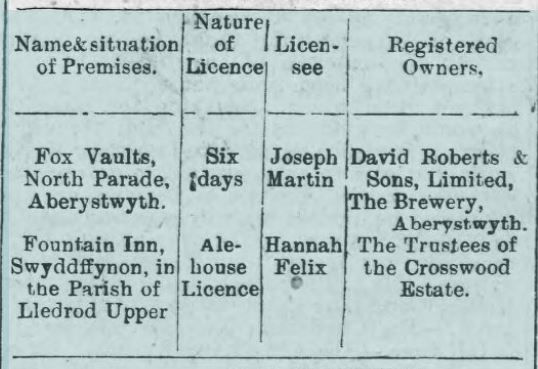