1895
"CARDIGAN. CONTRAVENTION OF THE SUNDAY CLOSING ACT. -At the Lower Troedyrawr Petty Sessions, held at the Guildhall on Tuesday last, Mr John Richards, Tanners' Arms, Verwig, pleaded guilty to a charge preferred against him by the police of keeping his licensed premises open on Sunday, the 4-th inst., and was fined 5 and costs. Five persons found on the premises, and who pleaded guilty through their advocate (Mr H. R. Daniel), were fined 2s 6d each and costs" SWDN 14 Aug 1895
1901 Census
John Richards, b1841, wife Elizabeth 1843, dau Mary A b 1877, servant Mary Edwards (only spoke Welsh)

1909
"The Chief Constable opposed the renewal of the license of the Tanner's Arms, Verwig. In so doing the Chief Constable reminded the bench that last year this license was referred to Quarter Sessions, but it was renewed, the chairman in so doing remarking that it was done solely because the magistrates had not sufficient money to compensate the tenant. Sergeant Davies said he knew this house well for the past three years. It was licensed to John Richards and situated in the parish of Verwig which had a population of 227 inhabitants. It was a medium sized house, surrounded by a church, chapel, and smithy, and had a stable for five horses, but no proper urinal. Its rateable value was £12. There was one other licenced house in the parish -Gwbert hotel - and in his opinion the Tanner's Arms was not required at all. The bench referred the licence to Quarter Sessions for renewal or compensation." WGWWA 4 Feb 1909
1909
Lic: John Richards
Closed, Compensation £305
(County Licencing Committee, 1905-1938 Ceredigion Archives, Cards/QS/L/1)

2017 Appears on Google Maps as 'Gwynfro', offering bed and breakfast.

Ferwig with the Tanners Arms 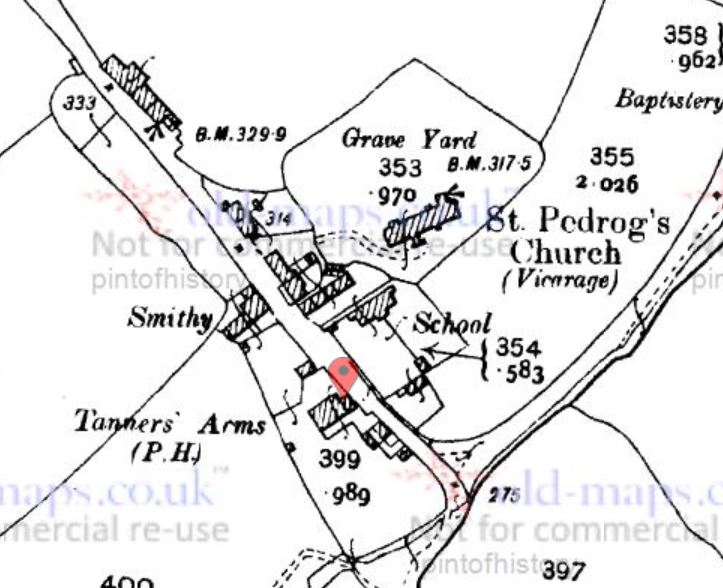