1851
"THE IVORITE SOCIETY was held on Monday, the 21st inst., at Alltyrodyn Arms, in the parish of Llandissil. The Rev. Evan Evans, of Llancwnlle, performed divine service at Eglwys Newydd, and afterwards preached an appropriate sermon. A. sumptuous dinner was prepared at the above-named inn, which comprised all the delicacies of the season. The Rev. Evan Evans ably occupied the chair, and made a very suitable address. The Rev. D. Evans, Hendry, and the Rev. Thomas Griffiths, of Lampeter, also ad- dressed the Society in apposite speeches. The Llandyssil band enlivened the company with well selected and ably performed pieces" Welshman 25 April 1851


1874
"TRIAL OF PRISONERS. STEALING FROM FHE PERSON. Rees Rees, on bail, was charged with feloniously stealing the sum of £3 16s., the moneys of Evan Jones, on the 14th September, at the parish of Llandyssul.—Mr J. M Davies (Antaron), instructed by Mr George, appeared for the prosecution and Mr Morris Davies, instructed by Mr John Jones, Llandyssul, for prisoner. Evan Jones, Butcher's Arms, remembered going to the Alltyrodyn Arms on the 14th September, and had £3 19s. in his pocket, when prisoner asked for the loan of 6d., saying that he had no money. They had some beer together, and afterwards the prosecutor fell asleep, and when he awoke found that he had missed the money. He then went after the prisoner and asked him for the money which had teen lost, when he said he had not got it. He afterwards asked again for the money, when prisoner gave him one sovereign, which the prosecutor accepted. The same amount and kind of money had been seen in prisoner's possession.—Mary Jones, servant at the Alltyrodyn Arms, and several other witnesses were called for the prosecution, after which Mr Morris Davies made an energetic address to the jury on behalf of the prisoner.-The Chairman summed up; and the jury having spent some time in deliberation, returned a verdict Guilty."—A letter was read by the Chairman from the Vicar of Llandyssul, stating that he was not aware the prisoner bore a bad character. The Chairman said it was to be regretted that bad character. The Chairman said it was to be regretted that such an ambiguous letter as that should be sent to the court by the Vicar-if it was the Vicar's letter-and asked Mr Superin- tendent R. Lloyd if he knew anything against the man.—Mr Lloyd said he could prove nothing against him, but he did not bear a good character in the neighoourhood.—The Chairman said it appeared to him a very bad case. The prisoner had gone to drink with the prosecutor, as a friend, and had afterwards robbed him. If that was common in Cardiganshire, which he hoped not, it would have to be met by suitable punishment; but in the present instance the case would be decided upon its merits a one, and the prisoner would be sentenced to four months imprisonment, with hard labour." CN 23 Oct 1874
1905
Petty Sessions: Llandyssul; number on list: 9; name of premises: Alltyrodyn Arms; Parish / Place: Llandysul Parish; Licensee: Evans, David Jonathan; owner or tenant : Owner; registered owner : licencee; free or tied: free; tied to: [blank]; type of licence: full; on or off licence: on; number of licenced days per week: 7. (1905 list)

Photograph of Alltyrodyn Arms in 2015 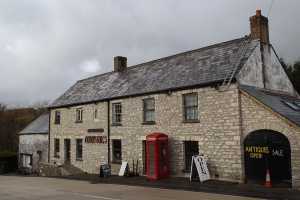 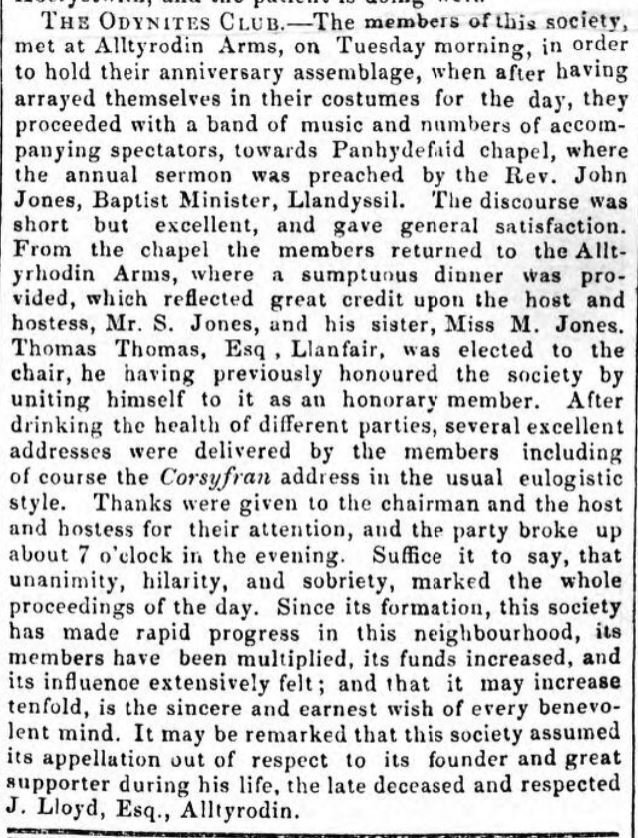 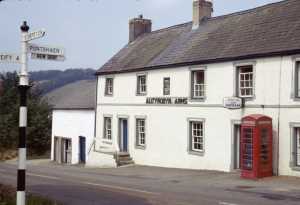